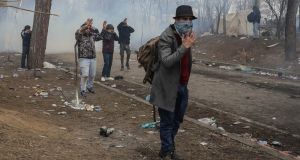 Migrants shelter from teargas fired from Greek border guards at Pazarkule border as they attempt to enter Greece from Turkey. Photograph: Osman Orsal/Getty

States along the so-called Balkan route into central Europe have vowed to take any steps necessary to prevent a repeat of the migration chaos of 2015, in what Hungary calls a vindication of its hardline stance against asylum seekers.

Thousands of migrants have tried to enter Greece since Turkey halted implementation of a deal with the EU to keep them on its territory, stirring memories of how a million people crossed the Balkans towards wealthy EU states five years ago.

Germany led efforts in 2015 to welcome people fleeing violence in Syria and elsewhere, but their arrival caused deep divisions in the EU and a backlash against immigration in many member states.

Hungarian prime minister Viktor Orban became a champion of this populist, nationalist movement by building fences on his country’s southern borders to block the mostly Muslim refugees and migrants, whom he has described as part of an “organised invasion” that threatens European security and culture.

Hungary’s immigration policy – which includes filtering asylum seekers through “transit zones” on the border with Serbia – is condemned by rights watchdogs and faces a legal challenge from the EU, but Mr Orban says his security-led approach to migration is now the European norm.

“We announced a policy [in 2015] against Muslim migration” and as a result “Hungarians were subjected to insults for protecting our borders”, Mr Orban said after talks with his Czech, Polish and Slovak counterparts last week.

Yet the policy had been “a success” and was becoming mainstream, he added. “We’re doing our job and we believe that our work speaks for itself.”

“Avoid a situation in which you could be in danger,” he told them on Friday. “Avoid moving towards a closed door.”

Countries to the north of Greece are issuing similar warnings.

“If necessary, we will defend our borders and we will do so efficiently ... This time I won’t wait for the EU’s response, but we will behave absolutely and exclusively in the interests of our security,” said Serbian president Aleksandar Vucic.

Bosnian security minister Fahrudin Radoncic urged the EU to “jointly protect not only its borders but also all other countries’ so that migrants do not move towards Serbia, Montenegro and Bosnia and are stopped in Croatia. ”

At the northern end of the route, Austrian president Sebastian Kurz said: “A situation like 2015 must absolutely not be repeated. Our aim must be to protect the EU’s external borders properly, to stop illegal migrants there and not to wave them through.”

Officials in some states have linked migration to the spread of the coronavirus, as Hungary’s government did when indefinitely barring asylum seekers from entering the transit zones last week.

“Order is the foundation of freedom,” Mr Orban said on Friday during centenary celebrations for the Hungarian police force, which he praised for defending the border.

Liberal illusions were now being cast aside, he told his audience, and “the era of sobriety is knocking on our door”.