All of Italy put on lockdown to combat coronavirus

‘Habits must be changed,’ says Conte as residents fail to take warnings to heart 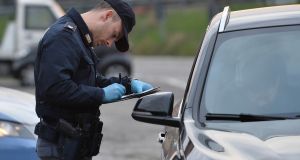 Italian prime minister Giuseppe Conte has put his entire country on lockdown to combat the coronavirus, banning all but the most important travel and halting social gatherings after Italians failed to take previous warnings to heart amid skyrocketing infections.

Two days after imposing the same strict measures on a quarter of the country, in the hard-hit north, Mr Conte urged all 60 million Italians to stay home.

The only travel allowed will be for proven work reasons, health conditions or other cases of necessity.

“Our habits must be changed, changed now. We all have to give up something for the good of Italy. When I speak of Italy, I speak of our dear ones, of our grandparents and of our parents,” Mr Conte said.

“We will succeed only if we all collaborate and we adapt right away to these more stringent norms.”

The nationwide restrictions take effect on Tuesday until April 3rd and include extending the closures of schools and universities and closing bars, restaurants and cafes at dusk.

Mr Conte took to task young people who continued to gather socially as the virus spread, saying “this nightlife ... we can’t allow this any more”.

Italy registered 1,807 more confirmed cases as of Monday evening, for a national total of 9,172. The number of dead in Italy increased by 97 to 463 — most of them elderly people with previous ailments.

Despite registering the largest number of cases outside of China, Italy has seen only superficial compliance with measures aimed at reducing social contact, including closing cinemas and theatres and banning fans from football games. The government gradually expand the so-called red zones.

Restrictions on movement initially applied to 11 towns in northern Italy with a total population of about 50,000 people before being expanded on Sunday to all of Lombardy and 14 provinces in the neighbouring regions of Veneto, Piedmont and Emilia Romagna.

On the first business day since the government locked down a broad area of the north, confusion reigned over who could go where and under what circumstances.

People circulating inside the city of Milan and in the provinces were subjected to spot checks to ensure they had valid reasons for being out. Violators risked up to three months jail or fines of 206 euros.

Earlier on Monday, civil protection authorities shut down all ski areas nationwide after one tried to tempt children who are locked out of school to the slopes. That signalled an end to patience with the sort of wheeling-and-dealing that is often admired in Italy.

For travellers and commuters, procedures at Milan’s main station were tightened significantly. Police officers in masks backed by pairs of masked armed soldiers checked tickets and documents of people arriving and departing. – PA