Former US vice-president Joe Biden has vowed his campaign "will send Donald Trump packing" as he secured victory in a string of US states on Super Tuesday. Video: Reuters 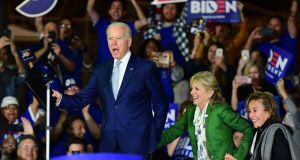 Former vice-president Joe Biden swept to victory in a string of US states overnight, capping an extraordinary 36 hours which saw the once-faltering candidate surge on Super Tuesday.

Mr Biden notched up a series of decisive wins in states across the country, and was positioned to possibly win the highest number of delegates of all candidates, as Americans in more than a dozen states went to the polls to select the Democratic candidate to take on Donald Trump in November.

Signs that a Biden surge was in the offing were evident within minutes of the polls closing. The former vice-president clocked up early victories in Virginia, North Carolina and Alabama, replicating his game-changing performance in South Carolina on Saturday when he surged to victory on the back of strong African-American support.

Though the race was more competitive in states like Tennessee and Arkansas, a broad swathe of southern states were soon called for Mr Biden.

Bernie Sanders won his home state of Vermont, as well as Colorado, Utah and California, with exit polls showed more than half of Latino voters had endorsed him.

In a measure of the swing to Mr Biden, the former vice-president won Minnesota and Massachusetts, where he had been trailing in the polls. Though Mr Biden evidently benefitted from Minnesota-native Amy Klobuchar’s decision to drop out and endorse him, Mr Sanders had been widely expected to clinch the state, given his strong polling in the Minneapolis area and beyond.

Similarly, Mr Biden had not been expected to win Massachusetts where Mr Sanders and Elizabeth Warren - the state’s senator - had been leading in polls.

Tuesday’s results raised question marks about the future of the campaigns of billionaire Michael Bloomberg and Ms Warren.

This was Mr Bloomberg’s first electoral test of the campaign after he chose to sit out the four early-voting states and instead concentrate his resources on Super Tuesday and beyond.

But despite spending more than $500 million on advertising, Mr Bloomberg’s only victory was in the Pacific island of American Samoa, where he secured 175 votes, generating four delegates.

Addressing supporters at a campaign event in Miami, Mr Bloomberg said he would not step down, but the Associated Press later reported that he was considering making an announcement about the future of his campaign on Wednesday.

Similarly, Ms Warren struggled to reach the 15 per cent threshold needed to secure delegates. In a major blow to her campaign, she finished third in her home state of Massachusetts.

Mr Sanders struck a hopeful and defiant tone as he addressed supporters in Vermont on Tuesday.

“Tonight I tell you with absolute confidence we’re going to win the Democratic nomination,” he said.

He also made some coded references to Mr Biden, noting that he himself had not voted to endorse the war in Iraq or in favour of trade deals that hurt parts of working class America.

“Let’s go on to the White House,” he said as he concluded his speech.

In a speech in Las Vegas, Mr Biden thanked his supporters and welcomed their “bold, progressive vision”.

He quoted Seamus Heaney’s The Cure at Troy, saying “History says, don’t hope on this side of the grave, but then, once in a lifetime, the longed-for tidal wave of justice rises up and make hope and history rhyme.”

Fourteen states, as well as American Samoa and Democrats Abroad, held their primaries on Tuesday - the most important day so far in the Democratic primary calendar.

A third of all delegates will be decided when the results of Tuesday’s contests are confirmed, with a clutch of important states still to vote on March 10th and March 17th.

The Democratic nominee to take on Mr Trump in November will be chosen at the Democratic National Convention in Milwaukee in July.