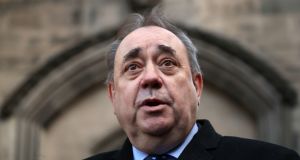 Alex Salmond, who dominated Scottish politics for a quarter of a century. Photograph: Jane Barlow/PA Wire

Former Scottish National Party (SNP) leader Alex Salmond will appear in court in Edinburgh on Monday charged with 14 counts of sexual and indecent assault, including one of attempted rape. Mr Salmond (65), who dominated Scottish politics for a quarter of a century, leading his party twice and becoming his country’s first minister, denies all the charges.

The alleged offences are said to have taken place between 2008 and 2014, with the most serious involving the attempted rape of a woman at Bute House, Mr Salmond’s official residence as Scotland’s first minister, in the month of the 2014 independence referendum.

Prosecutors say he placed the woman’s legs over his, repeatedly kissed her face and neck, groped her and blocked her path. They allege that he pinned her against a wall, pulled at her clothes and removed his before attempting to rape her on a bed.

He is alleged to have sexually assaulted another woman at Bute House a year earlier, forcing her to lie on his bed and pulling up her dress. Another charge says he indecently assaulted a woman at the residence in 2010, seizing her by the wrists and repeatedly pulling her towards him and attempting to kiss her.

Another charge says he sexually assaulted a woman on a number of occasions between 2011 and 2013 both at Bute House and in the Scottish Parliament, touching her buttocks over her clothing and stroking her arms and her hair.

Mr Salmond first served as SNP leader from 1990 to 2000, abandoning the radical, left-wing nationalism of his early years as a politician in favour of a gradualist approach. He stepped down after falling out with other senior figures in the party but returned in 2004, leading the SNP to victory in the 2007 Scottish parliament elections and becoming first minister in a minority government with the support of the Greens.

When he won an outright victory in 2011, Mr Salmond pressed for a referendum on Scottish independence, which was held in September 14th. After a majority rejected independence, he resigned and was succeeded by his protege, Nicola Sturgeon, returning to Westminster as an MP in 2015 only to lose his seat two years later.

The relationship between Mr Salmond and Ms Sturgeon has cooled in recent years, and his allies have criticised the current first minister’s cautious approach to holding a second independence referendum. Ms Sturgeon has ruled out any “wildcat” referendum that does not have the approval of the government at Westminster.

Mr Salmond’s allies are also critical of the Scottish government’s support for legislation similar to Ireland’s 2015 Gender Recognition Act, which allows people to legally self-declare their own gender identity.

Mr Salmond’s trial is expected to last about four weeks.