The Italian government has introduced dramatic measures over the weekend, quarantining 16 million people in the country's north, after its biggest one-day spike in coronavirus cases. Video: Reuters 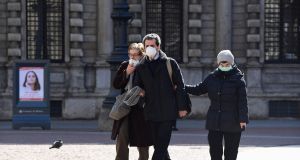 People wearing protective face masks walk on Piazza della Scala in central Milan on Sunday hours after millions of people in the north of the country were effectively placed under forced quarantine due to the worsening coronavirus outbreak in the country. Photograph: Miguel Medina/AFP via Getty Images. 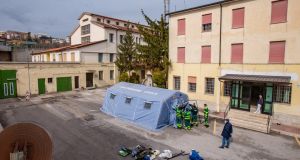 A tent for the preliminary medical examination of detainees is set up next to the prison in Potenza, southern Italy. Photograph: Tony Vece/EPA

Italy has ordered a virtual lockdown across a large part of the north of the country, including the financial capital Milan, in a major attempt to try to contain the rapidly growing outbreak of coronavirus.

The unprecedented restrictions, which will effectively put some 16 million people in quarantine and are to remain in force until April 3rd, were signed into law overnight by prime minister Giuseppe Conte.

The measures say people should not enter or leave Lombardy, Italy’s richest region, as well as 14 provinces in four other regions, including the cities of Venice, Modena, Parma, Piacenza, Reggio Emilia and Rimini.

Mr Conte said nobody would be allowed to move in or out of these areas, or within them, unless they had proven, work-related reasons for doing so, or health issues.

“We are facing a national emergency ... we have to limit the spread of the virus and prevent our hospitals from being overwhelmed.”

The government enacted the draft order just hours after officials announced that the number of coronavirus cases had risen by more than 1,200 in a 24-hour period - the biggest daily rise since the epidemic hit the country two weeks ago.

Deaths from the virus had also risen, by 36 to 233, while the number of patients in intensive care climbed to 567, up 23 per cent on the previous day.

Of the 5,883 Italians originally infected, 589 have fully recovered, but the hospital system has come under increasing strain.

“One of the best health systems in the world, in Lombardy is a step away from collapse.”

Milan airport authorities said services were so far operating normally, pending official notification of the new measures, while trains were running across the north.

According to the decree, all museums, gyms, cultural centres, ski resorts and swimming pools will be shut in the targeted zones. Leave was cancelled for health workers as Italy’s hospitals sag under the pressure of the virus.

Restaurants and bars will be allowed to open from 6am to 6pm and only if they can guarantee that customers are at least a metre apart.

As the alarm spread, Czech prime minister Andrej Babis said Italy should ban all its citizens from travelling to Europe. A large number of Italians visited Dublin at the weekend having made bookings for the Six Nations rugby clash against Ireland, which was ultimately cancelled.

Other countries around the world were also limiting activities, with events and festivals called off, and travel restrictions and warnings issued.

Of particular concern are passenger-packed cruise ships, many of which are confronting their own virus problems.

The Grand Princess, on which 21 people tested positive for the virus, was heading for the port of Oakland, California, after idling off San Francisco for several days. There is evidence that the ship was the breeding ground for a deadly cluster of almost 20 cases during an earlier voyage. The Department of Foreign Affairs has said at least four Irish citizens are on board the ship.

While the global death toll has risen past 3,400, more people have now recovered from the virus than are ill with it.

Though many scientists said the world is clearly in the grip of a pandemic – a serious global outbreak – the World Health Organisation is not calling it that yet, saying the word might spook the world further.

The virus is still much less widespread than annual flu epidemics, which cause up to five million severe cases around the world and up to 650,000 deaths annually, according to the WHO.

The US army said on Sunday it has decided to restrict travel to and from Italy and South Korea due to coronavirus outbreaks, and will also prohibit foreign troops from participating in US exercises, exchanges and visits in the most affected nations.

The decision, confirmed by an army spokeswoman, follows the confirmation on Saturday that two additional US service members have tested positive for the virus: a sailor in Italy and a Marine at Fort Belvoir, Virginia – an important military base in a Washington DC suburb.

One US servicemember, a soldier in South Korea, had previously tested positive for the virus.

The restrictions on travel should not be seen as a blanket prohibition, the spokeswoman said, and were focused on soldiers who had orders to deploy to or depart from Italy and South Korea to another destination, including for an educational opportunity.

The prohibition on foreign troops’ participation in US military activities appeared more comprehensive.

“Effective immediately, international students from countries with a CDC alert level category 2 and above for COVID-19 will not participate in US scheduled exercises, exchanges and visits,” the spokeswoman said.

In the UK, the number of confirmed cases has risen to 273, the Department of Health and Social Care said on Twitter on Sunday, up from 209 a day earlier, and the biggest one-day increase so far.

So far, two patients who have tested positive for coronavirus have died in Britain.

The government has also set out details of planned emergency legislation, including the possibility of holding more court proceedings via telephone or video link, and steps to protect the jobs of those who volunteer for the health service.