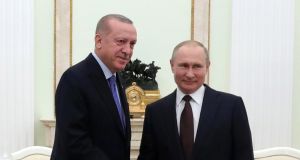 Russia and Turkey announced a ceasefire in the Syrian province of Idlib on Thursday as part of a deal that solidifies recent gains by the regime of Bashar al-Assad.

After six hours of talks in Moscow, following weeks of mounting tension between the two leaders, presidents Vladimir Putin and Recep Tayyip Erdogan declared a halt to months of fighting would begin at midnight on Thursday along the existing front lines.

Russia and Turkey back opposing sides in Syria’s nine-year civil war, and had risked being drawn into direct conflict by a recent escalation in Idlib that has forced hundreds of thousands of civilians in the province to flee.

“We do not always agree with our Turkish partners in our assessments of what is happening in Syria, but each time at critical moments, relying on the high level of bilateral relations we have achieved, we still manage to find common ground on the disputed issues that have arisen, and come to acceptable solutions,” Mr Putin told a joint press conference following the talks. “This happened this time.”

Mr Erdogan, who last week unleashed a Turkish military assault in retaliation for the death of dozens of Turkish soldiers in the province, said Ankara’s aim was “preventing the humanitarian crisis [in Idlib] from worsening”.

Turkey’s president said those displaced from their homes by recent fighting would be helped to return, without providing further details.

Mr Erdogan said Turkey would “preserve its right to respond to any attacks by the regime in the strongest way”.

Ankara had repeatedly demanded in recent weeks that the Syrian regime withdraw to the boundaries of a 2018 Turkish-Russian agreement – and threatened to use force to push pro-Assad troops back if they refused to comply.

But Mr Erdogan appeared to drop those demands during Thursday’s visit to Moscow.

A joint memorandum agreed by the two sides announced that a “security corridor” would be established to the north and south of the strategic M4 highway that runs from east to west through the province. There was no commitment for the withdrawal of Syrian regime forces from recently captured territory, including the north-south M5 highway that links the city of Aleppo with the country’s south.

Sinan Ulgen, chairman of the Istanbul-based think-tank Edam, said the deal was “more restrictive from the Turkish standpoint”, leaving Ankara in control of a much smaller patch of territory than before. “The positive side is that a ceasefire has been reached,” he added. “The alternative would have been a return to military hostilities.”

Mr Assad has long vowed to retake “every inch” of Syria, including Idlib, its last rebel redoubt. The recent offensive by his Russian-backed forces in the province, which is home to some three million civilians and dominated by jihadist fighters, has triggered what aid groups have described as the worst humanitarian crisis of Syria’s nine-year civil war.

Close to one million people have been forced to flee, with most of them heading north towards the border with Turkey, after aerial bombardments intensified since the 2018 ceasefire broke down last spring.

Bombing has repeatedly targeted schools and hospitals. At least 15 people were killed in an air strike on Thursday morning, with activists on the ground blaming Russian warplanes for the attack.

The latest onslaught triggered deep alarm in Ankara, which accused Damascus of war crimes and warned Turkey – home to 3.6 million Syrian refugees – could not take any more people. – Copyright The Financial Times Limited 2020