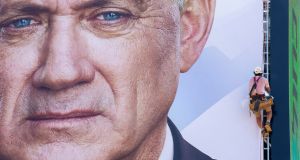 Israelis head to the polls on Tuesday for the second time this year, with little enthusiasm and a great deal of foreboding, fearing the result will lead to renewed political deadlock.

The elections in April left Binyamin Netanyahu on the cusp of a historic fifth term but his right-wing and religious potential coalition partners failed to agree on a formula for military service for the ultra-Orthodox.

In order to avoid President Reuven Rivlin tasking Benny Gantz, the head of the centrist Blue and White party, with forming an alternative coalition, Mr Netanyahu opted for a snap election in October, marking the first time in Israel’s history that elections failed to result in the formation of a government.

The election campaign has been lacklustre, lacking the usual passion of Israeli politics. The electorate just want it done with and a functioning government in place as soon as possible. But even that may be too much to ask.

Barring a last-minute upset, the likely result is deadlock, with neither the right-wing/religious bloc nor the left/centre/Arab parties able to achieve the required 61 seats for a Knesset majority.

The leading parties, Likud and Blue and White, are locked in a close race, polling around the 31-33 seat mark, representing a loss of a few seats for each party in comparison to the April vote.

The right-wing bloc still has an advantage over the centre-left by about 57-58 to 53-54, but is still short of a majority.

According to the polls, Avigdor Lieberman, head of the secular, right-wing Yisrael Beiteinu, will emerge as the kingmaker. His party is the only one polling significantly different numbers in comparison to April: surging from five Knesset seats to a projected 9-11. Whereas Lieberman, a Soviet-born former defence minister, was considered in the past part of Netanyahu’s natural bloc, the two are now bitter opponents and Lieberman is pushing for a three-party unity government, compromising Likud, Blue and White and Yisrael Beiteinu.

“To be very clear, our target in the coming elections is to establish a national unity government without Orthodox parties and without radicals,” he said, in a reference to the far-right parties.

Just a few weeks after the election, Netanyahu faces a pre-trial hearing in three separate corruption cases, which will probably be followed by a lengthy trial. If he wins the election he is expected to try push through a Bill granting immunity for a sitting prime minister.

“If he creates a coalition, he will immediately have a hearing in the beginning of October and then there may be an indictment,” he said. “In the past two years, we have here a prime minister who sacrifices everything to escape trial.”

Polls this week showed the extremist, anti-Arab, Jewish Strength party passing the 3.25 per cent minimum threshold required for Knesset representation and entering the parliament with four seats. The party, followers of the late Rabbi Meir Kahane, whose Kach party was banned for racism in the 1980s, has enjoyed a late surge in popularity, boosting the right-wing bloc.

Last Tuesday, Netanyahu declared that if he was re-elected, he would apply sovereignty over all West Bank settlements, starting with the Jordan Valley and the northern Dead Sea area.

“There is a unique and once-in-a-lifetime opportunity to do something with broad consensus and bring safe permanent borders to Israel, ” he said.

The move, clearly aimed at winning votes from the other right-wing parties, was the only major policy initiative of the campaign. He said the annexation plan would only be implemented after US president Donald Trump’s “deal of the century” peace plan is launched – expected shortly after next week’s election.

Settlers welcomed the move as a “historic breakthrough” and the first step towards expanding Israeli sovereignty over the entire West Bank, but Palestinians termed it a “declaration of war”.

Earlier this week Netanyahu failed to fast track a Bill that would have allowed party activists to film inside polling stations, after unsubstantiated allegations of widespread fraud in the Arab sector. The move was seen as an attempt to intimidate Arab voters but also as creating an alibi for Netanyahu in the event that he failed to win next Tuesday.

“It will be absurd if we don’t win because the election was stolen at the ballot box. We find that unacceptable,” said Netanyahu, in what sounded to some like an ominous threat.

One thing is certain: no one wants another election and Rivlin said he would “do everything he can to prevent the possibility of a third election”.

With not much likelihood of a clear coalition emerging on the night of September 17th, speculation is already rife over what needs to happen to facilitate the formation of the next government.

Will there be a move in the Likud ranks to replace Netanyahu as leader in order to pave the way for a unity government with Blue and White? Will Blue and White split, with some of its Knesset members agreeing to join a Netanyahu-led government?

Israel could be facing a turbulent few weeks.