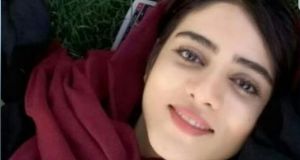 Sahar Khodayari: the Iranian university graduate dressed up as a man and went to the stadium by herself – in defiance of an Islamic ban. Photograph: Twitter

Sahar Khodayari’s parents would have preferred the 29-year old to watch her favourite football team on the television, but so great was her love for the sport that on March 12th, the Iranian university graduate dressed up as a man and went to the stadium by herself – in defiance of an Islamic ban.

Khodayari was arrested at Tehran’s Azadi arena and faced the threat of a six-month jail sentence. Last week she poured petrol on herself outside a courthouse and set herself on fire.

The death of the “blue girl” – so called because of the colours of the Esteghlal football team she adored – has prompted outrage across Iran. It has renewed focus on the ban on female attendance at football games, a potent symbol for the restriction of women’s rights in the Islamic republic.

“I feel I could die from grief after hearing about this harrowing death,” said Zari, the mother of a teenage girl. “Where can I scream? How can I remain silent? Those who loot this country’s wealth are free but an innocent girl had to go to jail and die. How could we swallow this injustice?”

Parvaneh Salahshouri, a female reformist member of parliament, said Iranian men had deprived women “of the most basic rights” and that “we are all responsible for the imprisonment and burning of [all] Sahars of this land”.

Ali Karimi, a leading Iranian footballer in a country where the sport is hugely popular, has called on men to show their sympathy with the “blue girl” by boycotting football. Across social media, Iranians have posted the colour blue in sympathy. On Thursday, Esteghlal footballers held a moment’s silence for her. On the same day, in an attempt to calm public anger, judicial officials attended Khodayari’s mourning ceremony.

Her arrest and the prospect of her jailing – hardline media say she had been warned by an official that she could be imprisoned but had not been sentenced yet – came amid a broader crackdown on journalists and social activists. The clampdown is driven by hardliners’ fear that the US could exploit public anger at economic hardship to push for regime change.

Ebrahim Raisi, the head of the judiciary who is believed to be close to the influential Revolutionary Guards, has said “the enemy” was sowing seeds of hesitation in people’s hearts “through social media and fake propaganda”. “We have to be alert more than ever,” he said.

Iran’s revolutionary court – which handles national security cases – has this month sentenced four journalists and three labour rights activists to up to 18 years in jail. In the wake of public anger, these sentences are under review.

Saba Kord Afshari, a 22-year-old woman who had objected to having to wear the hijab head covering that most women start wearing in their teenage years, was jailed for 24 years last month. At least half a dozen women activists are believed to have been put behind bars in recent months for campaigning against the hijab. As a result, many women in Tehran who had previously chosen to leave the house without a hijab are now covering their head.

“The system has decided to show might by insisting on things that the international community is sensitive about such as human rights issues,” said a reform-minded analyst. “Hardliners are sending a reminder to the US and to reformist opponents at home that they are in charge and will not back off.”

Female attendance at football matches remains a hugely divisive issue. Mohammad Jafar Montazeri, Iran’s prosecutor-general, said last month that “it is a sin for a woman to go to a stadium and face half-naked men. We will not be silent in face of those who break the taboos”. The senior clergy in the holy city of Qom have made clear they do not want the ban to be lifted.

With Iran under pressure from football’s world governing body Fifa to let women attend men’s matches, the centrist government of President Hassan Rouhani has said there was no ban on female attendance at international football matches. The situation is less clear with domestic league matches, which do not have to comply with international regulations.

On the day of the Esteghlal match against the UAE’s Al-Ain, Khodayari put on a blue hair piece and a long jacket in order to pass as a man, her sister has told domestic media. When male security forces prepared to do security body checks, she explained she was a woman and did not let them touch her.

Khodayari was one of eight children in a traditional and religious family. As a child, she had wanted to be a policewoman, but her father told her that she was a “girl and weak” and should work as a civil servant, something she railed against.

It was wrong of her to go to the stadium, he said. “It is not appropriate for women to go to stadiums. It is a crime,” he said. “I never stopped her from watching football on television at home.” – Copyright The Financial Times Limited 2019