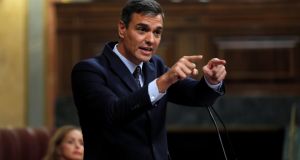 After five months without a government in place and with the country’s left at loggerheads, Spain is facing the prospect of a snap general election.

The acting prime minister, Socialist Pedro Sánchez, won an April election but has not yet managed to gain the parliamentary support needed to form a new administration. In the summer he lost an investiture vote and if he fails to win one by September 23rd, an election will be triggered for November.

On Monday and Tuesday, King Felipe is due to meet with leaders of political parties in order to decide whether to invite Mr Sánchez to make another attempt.

But given the failure of the Socialists to reach agreement with their most natural ally, the leftist Podemos, a fourth general election in four years is looking likely.

Disagreement over the structure of the new government, rather than over policies, has been the main obstacle. Mr Sánchez would prefer to govern alone with confidence-and-supply deals with Podemos and other, smaller parties. However, Podemos wants to be part of a formal coalition.

On Thursday, Podemos leader Pablo Iglesias telephoned Mr Sánchez with a new proposal: a short-term coalition that would last only until the next budget is approved, at which point Podemos would offer to leave government while continuing to lend its parliamentary support.

However, Mr Sánchez rejected that initiative and the acting government’s spokeswoman, Isabel Celaá, described it as “absurd and devoid of content” on Friday.

A Socialist Party source was quoted as saying that “the necessary trust is not there, nor is a proposal for a united, coherent government heading in the same direction”.

Polls have consistently shown that the Socialists would benefit in the event of a repeat election, albeit without securing a majority, provoking claims from some quarters that Mr Sánchez has been seeking such an outcome all along. However, many polls show Unidas Podemos – Podemos’s electoral platform – losing ground, meaning that overall the left might not make gains.

“Voters tend to punish politicians when they suspect that they want to lead them to the ballot box just because of the polls,” warned Mr Iglesias.

He has said he will ask King Felipe next week to offer “arbitration and mediation” between the two parties ahead of their deadline.

Pablo Echenique, who has been Podemos’s chief negotiator in recent months went further in criticising the Socialist leader. “It seems that [Sánchez] is determined . . . to drag us into elections to see if he can win 10 more seats,” he wrote on Twitter.

Although Mr Sánchez has tight control of his party, some figures within it have expressed concern about his strategy.

“I prefer a bad coalition to good elections,” warned Andrés Perelló, a member of the Socialist Party executive.

A new election would be held on November 10th, meaning that the campaign ahead of it could take place against a backdrop of political and economic uncertainty.

The highly anticipated verdict of the trial of 12 Catalan independence leaders is expected in October and there are also some concerns about the recent performance of the Spanish economy, particularly with Brexit approaching.