America Letter: President may be shifting from hawkishness in overseas relations 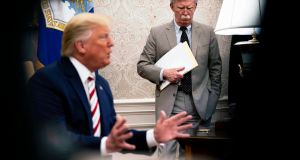 This week Donald Trump returned to the top of the news agenda with a bang as he ousted national security adviser John Bolton.

Bolton’s departure was not entirely unexpected – there had been tensions between the two men for months – though his departure marks the latest development in a head-spinning series of personnel changes in the White House.

More important is what it means for Trump’s foreign policy.

Fourteen months out from the election, Trump badly needs a foreign policy win. None of his much-vaunted initiatives have borne fruit. His Middle East peace plan, led by son-in-law Jared Kushner, and dubbed the “deal of the century” by Trump, has failed to get off the ground, with neither Israeli nor Palestinian representatives attending an investor conference earlier this year.

On North Korea, despite his bold decision to meet with leader Kim Jong-un on three occasions and step on to North Korean soil, the nuclear state has in fact increased rather than reduced its nuclear capability while reducing the number of missile tests.

In Afghanistan, American troops still remain in the region 18 years after the September 11th attacks, while Washington’s decision to back opposition leader Juan Guaidó in Venezuela has resulted in a political stalemate in the country.

Bolton’s departure was welcomed by many Trump allies who feared that the hawkish national security adviser could lead America into further conflict. His pugnacious stance on issues such as North Korea, where he last year advocated pre-emptively striking the country, and Iran, where he previously advocated regime change, was dangerously provocative to many.

Trump has adopted a peculiar mix of isolationism and belligerence since assuming office, flip-flopping on foreign policy issues throughout his presidency. Having followed through with his promise to withdraw from the Iran nuclear deal, for example, he immediately embarked on a strategy of engagement with North Korea, a more dangerous nuclear threat.

But Bolton’s departure suggests that Trump, having flirted with a more hawkish foreign policy, is moving back towards the non-interventionist policies he embraced during his campaign – policies that put him close to his predecessor Barack Obama, who wanted to take America out of ill-advised wars.

Frustrated with the notion of America as the world’s policeman – an ideology still sacrosanct for many Republicans – Bolton’s departure may indicate that Trump is looking to strike deals with America’s adversaries in a bid to secure a foreign policy win before the next election.

His plan to invite the Taliban to Camp David days before the anniversary of September 11th – a proposal that went down badly with the American public this week – illustrates just how far the president’s deal-making instincts can override any qualms about negotiating with dictators or terrorists.

Trump’s next foreign policy move is likely to focus on Iran. There has been speculation that one of the many points of contention between Trump and Bolton in recent weeks was disagreement about engagement with the Iranians. Bolton is said to have strongly opposed any easing of sanctions on Tehran in order to get Iranian president Hassan Rouhani to the table.

While secretary of state Mike Pompeo said again this week that the United States was willing to meet with the Iranian leadership, Iran is demanding an easing of sanctions as a condition for talks.

The issue is likely to come to the fore in just over a week’s time when both Rouhani and Trump are scheduled to attend the UN General Assembly in New York.

Given that Trump has taken a cautious stance on Iran – he cancelled an air strike planned as a reprisal for the shooting-down of an unmanned US drone in the Gulf region in July – a concession on the US side is possible, and a meeting between the two men could happen.

Bolton’s departure is also likely to impact the balance of power within the administration. His ousting is a victory for Pompeo, who clashed with the national security chief, and has managed to keep the president’s ear since replacing Rex Tillerson last year.

There have even been rumours that Trump may not choose a successor for Bolton, instead merging the role of secretary of state and national security adviser, significantly expanding Pompeo’s reach. The move would not be unprecedented – Henry Kissinger occupied both roles during the Nixon administration, for example.

Trump, however, appeared to rule such a move out later in the week, instead claiming there were 15 candidates for the job. It seems that in the Trump White House there may not be room for more than one commander-in-chief.