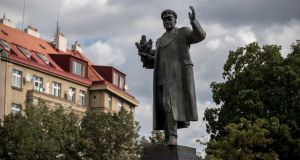 “Svoikh ne brosayem,” Russian officials and military men like to declare in praise of their country’s loyalty to its people: “We don’t abandon our own.”

The pledge appears to extend beyond Russian citizens to monuments orphaned by the collapse of communism 30 years ago and left at the mercy of nations that do not share the Kremlin’s reverence for Soviet might and martial glory.

Moscow is mounting its latest staunch defence of a statue in Prague, where plans to move a monument to Red Army general Ivan Konev have prompted Russian politicians to threaten sanctions and compare the local mayor to a Nazi official.

Russia credits Marshal Konev and his troops with liberating Prague and much of what was then Czechoslovakia from German forces in 1945, and his statue was raised in Prague’s Bubenec district by communist officials in 1980.

Czech historians say the Nazis had all but fled Prague by the time Konev’s troops arrived, but the main objections to his statue relate to the post-war record of a man who won the highest Soviet honours and was buried in the Kremlin wall.

In 1956, Konev was supreme commander of the communist Warsaw Pact armies that crushed an uprising in Hungary, and five years later he was the leader of Soviet forces in East Germany when construction of the Berlin Wall began.

According to a plaque that was placed on the statue last year, Konev played a key role in Soviet surveillance operations before the bloody 1968 Soviet invasion of Czechoslovakia, which shattered the “Prague Spring” and hopes for liberal reform.

Russia calls this claim a slur and an attempt to rewrite history, and it has complained to the Czech authorities as Konev’s statue has repeatedly been daubed with red paint and other graffiti in recent years.

In response to a spate of such incidents last month, Ondrej Kolar, the mayor of Bubenec district, ordered the statue to be covered with a tarpaulin, but that angered Moscow and a small but vocal group of pro-Russian protesters in Prague, who tore off the plastic sheeting and placed flowers at the site.

The row has now escalated sharply, after the district council voted to move the statue to a new location and replace it with a less controversial monument.

Moscow’s foreign ministry said on Friday it was “outraged by the cynical decision”, while Russian senator Sergei Tsekov said his country should display “a principled, tough response, right up to imposing economic sanctions”.

“In the European Union they only think about money, and moral and spiritual values have no significance for them, so we need to punish them economically. In particular, we should halt the tourist trade with the Czech Republic, ” he declared.

“If we behave in the way this Czech politician suggests, then clearly the next step will be burning Russian books or something like that,” Mr Medinsky claimed.

The Czech foreign ministry summoned the Russian ambassador on Friday to protest over those comments, while Czech president Milos Zeman – who maintains warm ties with the Kremlin – criticised talk of moving the statue as “shameful”.

From the Baltic to the Black Sea, Russia has tried to protect and preserve contentious reminders of the Soviet era.

Moscow denounced Ukraine for demolishing hundreds of statues of Vladimir Lenin and other Soviet figures after its 2014 revolution, and it has complained about repeated defacement of a huge Red Army monument in the Bulgarian capital, Sofia.

When Estonia moved a statue of a Soviet soldier from the centre of Tallinn in 2007, it sparked street clashes and a crippling cyber attack that was attributed to hackers working for Russia.

Yemen funds for humanitarian aid fall far short of sum needed 20:00
Black and Asian people in England 50% more likely to die from Covid-19 – report 19:07
Dutch come under fire for treatment of migrant workers in meat plants 18:31
Biden accuses Trump of fanning the ‘flames of hate’ as protests continue 18:17
Coronavirus: Spain records no new deaths for second day in a row 16:57