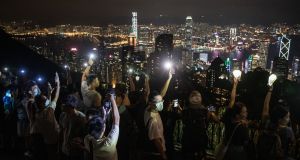 The unofficial anthem adopted by Hong Kong protesters reverberated across the city’s steep hills, parks and shopping centres on Friday night as demonstrators marked the traditional Mid-Autumn Festival by massing in public spaces and making their voices and demands heard.

Human chains were formed and hillsides lit up by lantern and torch-carrying protesters on the city’s Victoria Peak and Lion Rock, while crowds gathered on both sides of the harbour to sing their clarion call “Glory to Hong Kong” and chant slogans such as “Liberate Hong Kong, revolution of our times”.

With the protests entering their 15th week, plans by demonstrators to hold marches on Saturday and Sunday have been rejected by the police, who cited security concerns. As in recent weeks many protesters are still expected to take to the streets despite the lack of an official permit, meaning they could be automatically arrested for joining an “unlawful assembly”, a charge that can carry a prison term of up to five years.

Demonstrators are also planning sit-ins in shopping malls and public spaces, another “stress test” of the airport in a bid to disrupt its operations, and a rally outside the British consulate to urge Westminster to ensure Beijing honours the Sino-British Joint Declaration. The declaration outlines the “one country, two systems” formula that guarantees Hong Kong freedoms after the 1997 handover not enjoyed on the mainland, including freedom of expression and assembly, and an independent legal system.

The protests were triggered by a planned law that would have allowed extradition to mainland Chinese courts, but were then further fuelled by a widespread perception of creeping Chinese influence in the city’s affairs and a steady erosion of freedoms, as well as allegations of police brutality during the protests.

Hong Kong’s chief executive Carrie Lam finally withdrew the tabled extradition Bill last week, but “too little, too late” was the immediate response from the protesters, who said the withdrawal of the proposed law was only one of their five core demands.

In addition, they are calling on the government to retract its characterisation of the protests as “riots”; the unconditional dropping of charges for the almost 1,400 people who have been arrested in connection with the protests; an independent commission to investigate the use of force by police; and the introduction of genuine universal suffrage to elect the city’s leaders.

Currently Hong Kong’s leader is selected by a 1,200-strong committee that is widely seen as being pro-Beijing and pro-establishment. Pro-democracy advocates gave Carrie Lam the nickname “777” after the last election, being the number of votes she procured to lead the city of 7.4 million people.

The 2014 Umbrella Movement – the street protests that occupied Hong Kong’s centre for three months – was sparked by a proposal to introduce a system of universal suffrage to select the city’s leader, but with the caveat that all candidates had to be pre-approved by Beijing. That proposal was widely rejected.

“True universal suffrage is key to all of Hong Kong’s problems – we want one person, one vote. And Beijing should have no say about who can run for office,” said protester Calvin Lee on Friday.

He said the protests would continue until all five demands were met.

As he suggests, the protests show no sign of abating and if anything the decibel level has jumped in recent days as protesters have embraced the anonymously written song Glory to Hong Kong as their unofficial anthem. The song carries combative lyrics such as: “Arise! ye who will not be slaves again … Now to arms! For freedom we fight! With all might we strike! … Break now the dawn, liberate our Hong Kong.”

A video went viral recently of a choir and philharmonic orchestra – all donning the standard protester attire of black clothes, gas masks and yellow hard hats – performing a rousing rendition of the resistance’s new soundtrack.

At a World Cup qualifying match between Hong Kong and Iran this week, the Hong Kong fans booed the Chinese national anthem, March of the Volunteers, and sang their newly adopted anthem instead.

During the week flash mobs popped up in malls across the city to sing the song, even engaging once with a pro-Beijing group in a sing-off when they tried to drown them out with China’s anthem.