India ramps up building of ‘stateless’ detention centres in Assam

Families face rupture after India declared some 1.9m people to be ‘outlawed’ 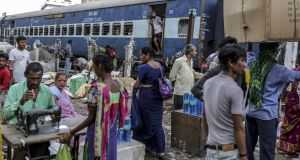 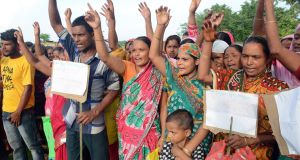 Villagers of Gorbheter and Bherveri whose names have been left out of the final list of the National Register of Citizenship engage in protest. Photograph: EPA/STR

India is fast-tracking the construction of a detention centre in its northeastern Assam state to house a fraction of the 1.9 million people who were recently declared “stateless” by the federal authorities, following their inability to produce valid documentation to confirm their residency.

Spread over 2.5 hectares, the 15-storey centre, 150km west of Assam’s capital Dispur, is encircled by a 6m-high wall embedded with watchtowers. It will be ready by December to accommodate some 3,000 people deemed to be illegal migrants.

Federal officials said nine similar incarceration centres were planned across Assam to detain “outlawed” people who have been unable to confirm their right of abode to the contentious National Register of Citizens, or NRC.

Consequently, thousands of families have faced separations, with some members included in the NRC and others not – on seemingly subjective criteria.

Many of those omitted from the register were women born in Assam who got married there and raised families. Like tens of millions of other Indians across the country, they had no documentation to support their residency claims, believing them to be unnecessary.

An inordinately large number to be declared stateless were either illiterate or victims of frequent flooding in Assam in which their homes, along with all their belongings, including identity papers, had been washed away.

The total of 1.9 million “stateless” people is about half of the four million who featured in the draft NRC released in August 2018.

Officials associated with the NRC concede that even the present number could significantly decline, as those who have been excluded have 120 days until the end of November to appeal their case at specially established “foreigners’ tribunals”.

To be eligible for Indian citizenship, all Assam residents were required to produce documents proving that they or their families had lived in the state before March 24th, 1971, the day before the war that led to Bangladesh’s liberation from Pakistan began.

At the time of independence from Britain in 1947, the Indian subcontinent was divided between India and West and East Pakistan (largely Bengali), which were separated by some 2,200km of unfriendly territory.

Over the years political and ethnic differences led to East Pakistan declaring independence from Islamabad in 1971.

And in the brutal military crackdown that followed, tens of thousands of refugees, mostly Muslims but also Hindus, fled to Assam, with which their country shares a 265km long porous and riverine border that was easy to traverse at the time.

This resulted in a demographic change in tea- and oil-rich Assam, with many of its 32 districts becoming Muslim-majority areas.

Local Assamese residents accused the refugees of taking their jobs and resources and resentments between Hindus and Muslims grew.

These antipathies eventually led to an anti-Muslim pogrom in 1983 in which more than 2,100 people were chased and killed by machete-wielding Hindu mobs in 14 villages across the state.

This bloodshed resulted in the Assam Accord two years later, which decreed that anyone who could not prove that they had come to the state before March 1971 would be expelled and their names deleted from the electoral rolls.

Opposition parties and commentators see the NRC scheme as an attempt to marginalise Muslims and unify Hindus in keeping with BJP’s Hindutva ideology of perpetuating Hindu hegemony.

The eventual future of all these illegal citizens is uncertain but many will end up in Assam’s detention centres for indeterminate periods, their rights unspecified. Bangladesh, burdened by the Rohingya refugee crisis, has indicated no willingness to accept a new lot of expatriates.