Next stop, Donald Trump. Jerusalem station to be named after US president 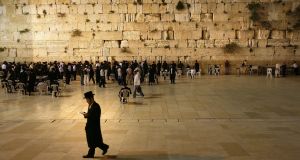 The Western Wall in Jerusalem. A new train station – it is planned to name it after US president Donald Trump – will be 50m underground, and will be connected by escalators to the esplanade of the wall

Plans by Israel to extend the Tel Aviv-Jerusalem fast train to the Western Wall in Jerusalem’s Old City have drawn criticism from planners, archaeologists and Jordan, which is the custodian of the holy sites in Jerusalem.

The high-speed train link between Tel Aviv and Jerusalem, via a stop at Ben Gurion international airport, was opened last year after innumerable delays, cutting the time between Israel’s two biggest cities to only 32 minutes.

This week a planning committee authorised extending the line within Jerusalem to the Western Wall. Israel plans to name the new station after US president Donald Trump, in recognition of his decision to move the US embassy to Jerusalem.

The new station will be 50m underground, and will be connected by escalators to the esplanade of the Western Wall.

Transport minister Bezalel Smotrich described the move as historic. “It is a very exciting time for Israel and for the generations to come. We are realising Zionism.”

The planned route includes a 3km tunnel beneath central Jerusalem and the Old City. Jordan called the move a “flagrant violation of international law”.

Jordan is the custodian of the Jerusalem holy sites, which include the compound behind the Western Wall known to Jews as the Temple Mount, the holiest site in Judaism, and to Muslims as al-Haram al-Sharif or the Noble Sanctuary.

Israeli environmentalists and archaeologists have also criticised the decision.

Extending the rail line is not the only controversial transport plan Israel is advancing for the historical Old City. Last year Israeli authorities passed a plan to build a cable car to transport visitors from west Jerusalem to the Western Wall. Critics said it would damage the historic landscape of the Old City – a Unesco World Heritage site.

Daniel Seidemann, director of Terrestrial Jerusalem, an NGO that studies the political impact of development in Jerusalem, told The Irish Times the train plan was not feasible, and the timing had more to do with next month’s election than the benefit of Jerusalem.

“It’s just another example of how Jerusalem is very inspirational and sometimes it inspires megalomania. Beyond the investment and engineering involved, it is completely oblivious to political and religious sensitivities.

“We are witnessing what I would call the Disneyfaction of Jerusalem, turning it into something of a theme park.

“I don’t think anybody who pays reverence to this city could think of ruining it by having a cable car, and this new plan involves massive underground construction under one of the most sensitive sites on the planet.”