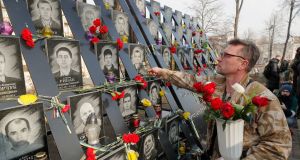 A Ukrainian man places flowers at a memorial to activists who were killed at Maidan Square during the 2014 anti-government protests in Kiev. Photograph: Sergey Dolzhenko/EPA

The last time Olena Lysak spoke to her uncle, on January 22nd, 2014, she asked why he would not come home to western Ukraine from a huge anti-government protest camp in the heart of the capital, Kiev.

“I’m staying here for you, and for your children and grandchildren,” Roman Senyk told her.

On Kiev’s Maidan square, a few hundred metres from Ukraine’s parliament and the headquarters of its then pro-Moscow president Viktor Yanukovich, fighting between protesters and riot police was intensifying. As volleys of rocks, petrol bombs and tear gas split the freezing air, two demonstrators were shot dead; Senyk (45) was also hit soon after talking to his niece, and he died three days later.

They were the first fatalities of what Ukrainians call their “revolution of dignity”, which would ultimately claim more than 100 lives as security forces opened fire on Maidan six years ago this week, before Yanukovich and his allies fled to Russia.

Inspired by her uncle and the uprising’s call for an end to graft, impunity and Kremlin influence in Ukraine, Lysak joined a new police patrol force established under its first post-revolution president, Petro Poroshenko.

He was ousted by ex-comedian Volodymyr Zelenskiy in last year’s elections, but as Ukraine commemorates the revolution’s bloody victory, Lysak and other relatives of its victims believe justice is still a distant prospect.

No one has been held to account for the worst carnage of winter 2013-2014, despite extensive video footage of masked riot police shooting at unarmed protesters. The indicted officers deny wrongdoing, and ask who will be held responsible for the death of at least 13 of their colleagues on Maidan.

“I can’t say I have any trust in the new authorities, because they have done absolutely nothing to make us trust them,” says Lysak (29).

“I think the kind of people who prosecuted and jailed [Maidan] protesters and acted against the Ukrainian people are returning to power. They are sticking spokes in the wheel to prevent a proper investigation to find the perpetrators.”

In the chaotic aftermath of the revolution, many members of the “Berkut” riot police unit that was involved in the worst violence found refuge in Russia and in Crimea – which the Kremlin annexed in March 2014 – and in areas of eastern Ukraine that Moscow-led separatists seized and still control.

Several suspects were freed by dubious court rulings in Kiev while others were shielded by police colleagues. A haphazard overhaul of Ukraine’s criminal justice system then added more confusion to the handling of complex cases that were already beset by meddling and incompetence.

Yevhenia Zakrevskaya, a lawyer for victims’ relatives, went on hunger strike for 13 days last November over the disruptive transfer of Maidan cases from one investigative agency to another.

She says a shortage of staff, funds and expertise have hampered investigations, but cronyism and politicking are also major factors.

“There’s a lack of will from the police leadership – starting with interior minister Arsen Avakov – to purge the police of those who are ready to obey illegal orders,” Zakrevskaya told The Irish Times.

“Many Berkut officers and their chiefs are still working, even when they are indicted and a case goes to court. It really interferes with and hinders the investigation. It makes it impossible to get ‘insider’ testimony from officers themselves.”

Ukrainians ran out of patience with Poroshenko last year and backed Zelenskiy and his team of political novices to reform the country and finally resolve the Maidan case and other major investigations.

Some people’s faith in Zelenskiy was shaken in December, however, when he freed the only five Berkut officers still in custody over the Maidan killings in a prisoner exchange with Russian-led separatists in Ukraine’s eastern Donbas region.

“This was absolutely unacceptable. It was an abuse of the law-enforcement and judicial system and a breach of all conceivable laws and national and international norms,” says Zakrevskaya.

“They should not under any circumstances have been exchanged before a verdict was given. Now the legal, judicial evaluation of the events of that winter [2013-2014] is under serious question.”

Zelenskiy said the release of Berkut officers was a key condition for Russia, which he is calling upon to end a war in Donbas that has killed about 14,000 people.

“If I could give away 100 Berkut fighters to return one of our scouts, I would do it,” he said, while bemoaning Ukraine’s failure under Poroshenko to secure convictions for the Maidan massacre.

Zelenskiy insists that prosecutors are now striving to make up for lost time.

“Our country’s most complicated case is Maidan,” he said last week, while complaining that documents and other evidence had disappeared in previous years.

“I know for sure that [people] are working on it faster now than they have for several years. I cannot say when they will find those who ordered [the shootings], but with the killers things are clearer. We are putting all our effort into this,” he told the Interfax-Ukraine news agency.

Prosecutor general Ruslan Ryaboshapka criticised the handling of the Maidan cases under predecessors including Yuriy Lutsenko and Viktor Shokin, who have gained prominence helping Rudy Giuliani with his controversial work in Ukraine for US president Donald Trump.

“We should recognise, unfortunately, that the way the investigation was conducted didn’t give society the answers to key questions,” Ryaboshapka said recently.

Zelenskiy is adamant that those accused of the Maidan killings will be tried in absentia, as Yanukovich was when a Kiev court convicted him of treason last year.

But many Ukrainians fear justice will be sacrificed to politics, as Zelenskiy pursues a peace deal and Russia – intent on weakening post-Maidan Ukraine’s founding narrative of tragedy and heroism – shields the main suspects and claims that pro-revolution provocateurs shot protesters and riot police in Kiev.

“The Maidan cases are not their priority,” Zakrevskaya says of Zelenskiy and his team.

“They will give them only as much attention as civil society and the ‘street’ demand.”