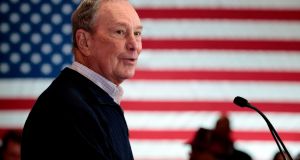 The upcoming debate will be the first time Michael Bloomberg will participate in a debate with his 2020 rivals, and he is likely to come under intense scrutiny. Photograph: Jeff Kowalsky/AFP via Getty

Former New York mayor Michael Bloomberg will join a debate with his rivals for the Democratic nomination for the US presidency for the first time on Wednesday, after a new poll showed him in second place nationally.

The poll released by NPR, PBS NewsHour and Marist on Tuesday, showed a surge in support for the billionaire businessman who is running to become the Democrats’ candidate to take on Donald Trump in the presidential election in November.

Mr Bloomberg now ranks at 19 per cent nationally among Democrat and Democrat-leaning independents, behind Vermont Senator Bernie Sanders who leads the poll at 31 per cent. This marks a sharp increase in support from the same poll in December which placed him at 4 per cent.

His performance in the poll makes him eligible to participate in Wednesday night’s debate in Las Vegas. Candidates must secure above 10 per cent in four polls in order to qualify for the debate according to new debate qualification rules introduced by the Democratic National Committee last month.

The change of rules – which no longer require candidates to secure a set number of individual contributions – was criticised by Mr Bloomberg’s opponents, who claimed that the rule change was designed to facilitate the billionaire businessman who is funding his own campaign.

It will be the first time the former mayor will participate in a debate with his 2020 rivals, and he is likely to come under intense scrutiny.

Mr Sanders, who won the New Hampshire primary and finished a close second in terms of national delegates in the Iowa caucuses, has hit out at Mr Bloomberg in recent days.

“Mr Bloomberg, like anybody else, has a right to run for president. He does not have a right to buy the presidency,” he said at a campaign event on Monday, noting that Donald Trump was also a billionaire who got “massive amounts of campaign contributions from his millionaire friends.”

Similarly, Mr Biden also highlighted his record on race relations, stating that Mr Bloomberg “can buy every ad he wants, but he can’t, in fact, wipe away his record.”

The latest poll brings more concerning news for Mr Biden who is struggling to salvage his faltering campaign after poor showings in New Hampshire and Iowa, the first two states to select their nominee. While Mr Biden was placed third in Tuesday’s NPR-PBB Newshour-Marist poll with 15 per cent of the vote, the fact that he has been overtaken by Mr Bloomberg could spell difficulty for the vice president.

Mr Bloomberg is chasing the moderate vote, and is likely to eat into Mr Biden’s support base. In particular, the former New York mayor has been campaigning in southern Democratic states with large African-American populations – a constituency where Mr Biden commands strong support.

Mr Bloomberg, who has faced criticism for his “stop and frisk” policy while mayor of New York which disproportionately affected young black men, has been focused on building African-American support for his candidacy, securing important endorsements from African-American politicians in recent weeks.

A new ad released by his campaign in recent days also highlights his links with Barack Obama, the first black president, using a voiceover of the former president extolling Mr Bloomberg’s virtues.

Mr Bloomberg, who ran for New York mayor as a Republican, has been spending millions of dollars of his personal fortune on his campaign for president. While Wednesday’s debate takes place in Las Vegas ahead of Saturday’s Nevada caucus, Mr Bloomberg is not on the ballot.

He has chosen not to contest the first four voting states – Iowa, New Hampshire, Nevada and South Carolina – and instead focus on Super Tuesday, which will see 15 states and territories vote on March 3rd.