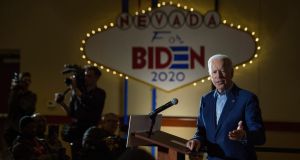 US president Donald Trump arrives in the west coast of the United States on Tuesday for a four-day visit as he steps up his campaigning ahead of November’s election.

The president will hold a series of fundraisers with supporters in California, and is also due to hold re-election rallies in Arizona and Colorado.

His schedule will culminate in a “Keep America Great” rally in Las Vegas on Friday night on the eve of the Nevada caucuses. The top contenders for the Democratic Party’s nomination for the presidency are vying to become the party’s choice as Democrats seek to wrest back control of the White House.

On Saturday, registered Democrats and independents in Nevada will select their preferred candidate at a series of caucuses throughout the state.

The process is facing intense scrutiny after the Iowa caucuses on February 3rd descended into chaos and confusion mainly due to problems with an app that was developed for communicating results on caucus night. The debacle, which prompted the resignation of the Iowa Democratic Party chairman, has raised questions about the suitability of the caucus system for choosing presidential nominees.

The Nevada Democratic Party had been due to use the same app commissioned by the Iowa branch, but abandoned this plan after the technology malfunctioned in Iowa. Instead the party announced it would use a Google calculator uploaded to 2,000 new iPads specifically purchased for the caucuses, though precinct captains in the various caucus sites across the state would also track the votes on paper sheets.

Early voting has already begun in Nevada, which has a vibrant Latino population and a growing African-American and Asian-American community, particularly around the greater Las Vegas area.

Polls show that Bernie Sanders, the winner of the New Hampshire primary who came a close second to former South Bend mayor Pete Buttigieg in Iowa, is ahead in Nevada.

The Nevada poll, commissioned by the Las Vegas Review-Journal and non-profit group AARP, and released on Friday, showed the Vermont senator on 25 per cent, with former vice-president Joe Biden on 18 per cent. Massachusetts senator Elizabeth Warren was on 13 per cent, followed by billionaire Tom Steyer on 11 per cent and Mr Buttigieg and Minnesota’s Amy Klobuchar tied in fifth place on 10 per cent.

Mr Sanders has a strong ground operation in the state and has been campaigning vigorously throughout the weekend. But despite his apparently secure lead in the polls, he received a setback when the powerful Culinary Workers Union warned its members that Mr Sanders’s “medicare for all” plan – a form of nationalised health insurance – could imperil their own union-agreed health insurance plans.

Mr Biden faces strong pressure to perform well in Nevada, as his campaign struggles with a worse-than-expected outcome in Iowa and New Hampshire. In a boost for the former vice-president, the state’s lieutenant-governor, Kate Marshal, endorsed Mr Biden, claiming he could bring “unity” and help to move past the “Washington gridlock”.

Mr Biden is banking in particular on a strong performance in South Carolina, which holds its primary on February 29th, three days before Super Tuesday, when more than a dozen states vote. Former New York mayor Michael Bloomberg has focused his campaign on the Super Tuesday states, choosing to opt out of the four first states to hold their primaries and caucuses.