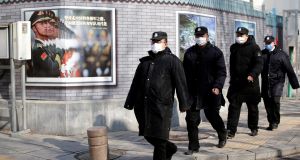 Disclosure is the best vaccine.

This is a comment that has been popping up a lot online over the past two weeks in China as hundreds of millions remain cooped up in their homes and assess the crisis developing around them.

“Chernobyl 2020” or “Wuhan = Chernobyl” are others doing the rounds, as viewers of the HBO miniseries make comparisons with the Soviet Union’s efforts to suppress information on the 1986 nuclear disaster in Ukraine with China’s handling of the coronavirus crisis.

China’s leaders have been lauded at home and abroad for their efforts to control the viral outbreak over the past two weeks. But it is what happened – or didn’t happen – in the six weeks prior to the declaration of a national emergency on January 23rd that has angered many.

“This epidemic was allowed to spread for a period of more than forty days before any cities were closed off or any decisive action was taken,” wrote researcher Da Shiji in a detailed analysis on the China Media Project’s website.

Information is still fragmented, but we know officials reported the first case of a patient with an unknown, Sars-like infection on December 8th – a stall operator from the Huanan Seafood Market in Wuhan which is known for also stocking an array of wildlife.

All through December and for much of January, the official message was consistent: the virus was controllable, there were very few cases, its spread was preventable, there was no firm indication of human-to-human transmissions, and there were no infections among medical workers.

Several doctors in Wuhan have revealed, though, that they were dealing with numerous cases of pneumonia of unknown cause in December and early January. Initially many of the patients had been to the wet market, but then when their family members also showed up infected – people who had never been to the market – it indicated that there were human-to-human transmissions.

It was also later confirmed that 14 medical workers had been infected in that early phase.

Despite the calm facade of officials, we now know too that behind the scenes scores of Chinese experts were engaging in frantic research activity on “several . . . clusters of patients” in Wuhan in December.

There it was quickly dubbed the “patriotic” virus, a pathogen that people joked apparently loved China so much that it only wanted to infect foreigners.

Led by researchers from China’s Centre for Disease Control and Prevention (China CDC), 18 Chinese medical experts co-authored an academic paper on the Wuhan virus – titled A Novel Coronavirus from Patients with Pneumonia in China, 2019 – which was published in late January in the New England Journal of Medicine.

“In late December 2019, several local health facilities reported clusters of patients with pneumonia of unknown cause that were epidemiologically linked to a seafood and wet animal wholesale market in Wuhan,” the article said, adding the China CDC “dispatched a rapid response team” to conduct an investigation.

At the end of December, as that research was starting to reveal the grim nature of the situation, medical workers in Hubei received a written warning not to discuss the novel virus with anyone, including family members, and local media were instructed not to do any reporting on the outbreak, but to only carry reports issued by the central news agency.

In the last week of December, the hashtag #wuhansars was trending on social media, before being purged by censors.

Around that time, eight medical workers were arrested for “rumour-mongering” in Wuhan for warning people online about the spread of the virus.

One of those was Dr Li Wenliang, a 34-year-old ophthalmologist at Wuhan Central Hospital, who later contracted the virus himself and died early on Friday morning.

Dr Li’s death shook China, prompting an unprecedented outpouring of grief and anger on social media, with people labelling him a hero and condemning the party for their efforts to muzzle his early warnings.

The doctor fell ill on January 10th, the same day China announced it had identified the new coronavirus, created diagnostic kits, and was sharing the genome sequence information with the World Health Organisation and several other countries.

Still, between January 3rd and January 16th Wuhan official said there were no new cases, and continued to claim there was no clear evidence of human-to-human transmissions.

During this period, there was a major Communist Party conference going on in Wuhan. Authorities have long been intent on presenting an air of calm and social harmony while these political set pieces are in progress.

At the same time, however, the first cases were being confirmed in neighbouring countries, raising more than a few questions among observers online.

There it was quickly dubbed the “patriotic” virus, a pathogen that people joked apparently loved China so much that it only wanted to infect foreigners.

The number of officially confirmed cases stayed fixed at 41 until January 17th. Three days later – when the virus was finally in the national spotlight – the count jumped to 198. And three days after that it was approaching 600.

Even at that late phase, Wuhan was still very much open for business. On January 18th, 40,000 people were brought together in the city for the world’s biggest banquet, and officials were still promoting a massive campaign to lure tourists to Wuhan for the new year holiday, due to start on January 24th.

It was only on January 20th that President Xi Jinping issued an order on the control of the outbreak. Within three days 50 million people in Hubei were under lockdown, and soon after isolation strategies were introduced across the country.

This was a critical delay. In the preceding 10 days before the order was made about five million people had already left Wuhan for the lunar new year holiday, according to the city’s mayor.

Dr Li’s death has crystallised public anger and presented the party with perhaps its greatest existential crisis in decades.

On Friday, two weeks after Wuhan was locked down, the official figures for the novel coronavirus stood at more than 31,000 confirmed infections and 636 related deaths. Cases have been confirmed all across China and in 27 countries and territories around the globe.

The party was forced to make a humiliating mea culpa 17 years ago when it emerged officials had covered up the extent of the Sars epidemic, and to many it feels in some ways not much has changed.

There has been scathing criticism of the government’s handling of this crisis online, a rare situation in China. Over the past two weeks negative comments about authorities were largely left uncensored.

In a rare admission of fault, this week the Politburo Standing Committee concluded the epidemic exposed official “shortcomings and deficiencies” and Xi warned the failing could erode social stability.

“The outbreak is a major test of China’s system and capacity for governance,” he said. “We must sum up this experience and draw a lesson from it.”

Xi’s comments came before news of Dr Li’s death emerged, a development that has crystallised public anger and presented the party with perhaps its greatest existential crisis in decades.

In another highly unusual development last week, the supreme court issued a public statement slamming the government’s efforts to conceal early information on the virus.

Despite the apologies and concerns about information blockages, official patience with online criticism of the handling of the epidemic seems to have evaporated.

The Cyberspace Administration of China issued a public statement on Thursday saying it was clamping down on all “harmful” online content that has “spread panic”.

The statement said it was closing “problem sections” and several platforms had been instructed to stop “illegally engaging in internet news information services” in relation to the outbreak.

“Special supervision will now be in effect,” it said.

Once the party did mobilise in response to the outbreak, it turned on the wow factor by sealing off a province, erecting hospitals in days, effectively shutting down the vast country and launching “all-out-war” to protect the nation. That decisive action has been broadly welcomed.

But that alone cannot really protect the citizens, one person posted online.

“And it is not aircraft carriers, rockets that can land on the dark side of the moon, nuclear capabilities or even scientific laboratories,” they said.

“What we need,” they wrote, “is just the free flow of information and news.”