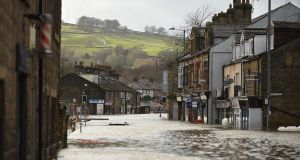 Storm Ciara lashed Britain with heavy rain and winds of more than 145 km/h on Sunday, forcing the cancellations of flights, train services and sports matches.

More than 200 flood warnings were issued across the country by authorities, including one severe warning in Yorkshire, northern England, where water broke some flood defences and could potentially threaten lives.

Cumbria Fire and Rescue Service urged people not to drive through floodwater after they rescued a number of motorists, while police forces across the country advised people to stay off the roads.

The Met Office said it had recorded a maximum wind speed 149km/h at Aberdaron in Wales. Inland, Manchester Airport recorded gusts of 138km/h, while 177mm of rain fell in Honister Pass, in Cumbria, in the 24 hours to 4pm on Sunday — around 1½ times the average February rainfall.

Firefighters in Blackpool had to rescue a motorist whose car got stuck in deep floodwater and a man escaped with minor injuries after being trapped for over an hour when a tree fell on a car in Flitwick, Bedfordshire.

A surfer was rescued from rough seas after losing his board following a search by rescue teams from the coastguard and the RNLI off the coast of Hastings, East Sussex.

Three people were injured after part of a pub roof collapsed in Perth on Saturday evening and a stand at Wisbech Town FC’s Fenland Stadium, in Cambridgeshire, collapsed due to powerful winds.

Here's a reminder of the #wind warnings in force for today due to #StormCiara#WeatherAware pic.twitter.com/3QTZMqxvjW

The weather caused major disruption to transport across Britain, with some domestic and international flights from airports including Heathrow and Gatwick cancelled.

This included Qantas flight QF10, which returned to Heathrow after experiencing a suspected tailstrike during takeoff.

Engineers found no damage to the fuselage of the Boeing 747, but the flight to Perth was cancelled because of limits on the crew's flying time, the airline said.

But strong tailwinds as Storm Ciara blew in saw British Airways break the record for the fastest flight by a conventional airliner from New York to London.

The BA112 flight, which took off from John F Kennedy airport, was scheduled to land at Heathrow at 6.25am on Sunday but arrived 102 minutes early at 4.43am.

Network Rail, which manages the country’s railways, said there was disruption across its network, with fallen power lines, trees and even trampolines blocking tracks, and warned people not to travel unless they had to.

All shipping movements in and out of the port of Dover on the south coast were suspended and the Humber bridge in northern England was closed to all traffic for only the second time since it opened in 1981.

Manchester City said its Premier League match against West Ham had been postponed due to “extreme and escalating weather conditions”, while Scotland’s Women’s Six Nations rugby match against England was among the other matches cancelled.

London’s eight royal parks, home to more than 170,000 trees, were closed and even the changing of the guard at Buckingham Palace, a major tourist draw, was also cancelled due to the weather.

In the Netherlands the same storm, Ciara, led to around 120 flights to and from Amsterdam’s Schiphol airport, one of Europe’s largest, to be axed or delayed as it blew in off the Atlantic. All professional Dutch soccer matches were cancelled.

In Germany, where Ciara was named Sabine, about 180 flights to and from Frankfurt airport – about 15 per cent of all planned flights – were axed. Lufthansa, Germany's largest carrier, said it would cancel short and long-haul flights from Munich airport on Monday until 12pm and 1pm GMT, respectively. Lufthansa's budget unit Eurowings said it had suspended flight operations at Hamburg, Berlin, Hanover, Dortmund, Duesseldorf, Cologne and Stuttgart.– Reuters, PA