Mark Rutte and Geert Wilders to engage in TV debate 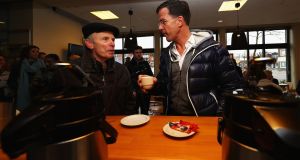 Dutch prime minister Mark Rutte will take part in a head-to-head TV debate with his anti-Islam opponent, Geert Wilders, just two days before the general election, in a final opportunity to persuade undecided voters not to swing to the right on March 15th.

Both men pulled out of a leaders’ debate broadcast by RTL on Sunday night, and now Mr Wilders has decided not to take part in an interview on current affairs show, Nieuwsuur (News Hour) – a decision his spokesman insisted was not related to safety concerns.

“We only do things that we like,” the spokesman said, “and this is not something we like.”

Mr Wilders, leader of the far-right Freedom Party, cancelled all public engagements last week when it emerged that a police officer on the team that provides 24-hour protection for politicians, diplomats and members of the royal family was being investigated for allegedly leaking classified information to Dutch-Moroccan gangsters.

After weekend consultations, Mr Rutte said that while all of the officers on Mr Wilders’s protection team were to undergo new background checks, a review had already confirmed there was no increased threat to his security – and so any further cancellations would be purely his own decision.

As a result, there was no reason why Mr Wilders might not be able to debate with him on March 13th, or to join the final party leaders’ debate scheduled by national broadcaster, NOS, for the following evening, the prime minister insisted. “If he wants to take part, we will make sure that he can.”

A television “face-off” between Mr Rutte and Mr Wilders, whose parties are running neck-and-neck in the opinion polls in the battle for the right to form a new multiparty coalition government, would be the highlight of what has so far been a lacklustre campaign.

Both pulled out of Sunday’s leaders’ debate when RTL decided to increase the number of participants from four to five. The programme went ahead with Christian Democrat leader, Sybrand Buma; Lodewijk Asscher of Labour; Alexander Pechtold of D66; Emile Roemer of the Socialists; and Jesse Klaver of GreenLeft.

However, without the two main players it was a low-key affair which failed to catch the public imagination – attracting only 1.2 million viewers compared with reality show, The Farmer Wants a Wife, which drew 3.5 million on a competing channel.

As the election campaign enters its final fortnight, with immigration at the top of the agenda, a new report has rapped the government’s knuckles for failing to reinstate regular structured meetings between its officials and representatives of the Netherlands’ ethnic minorities.

The regular meetings were abandoned in 2011, months after Mr Rutte’s first government, a minority coalition with the Christian Democrats, was set up with the support of the Freedom Party.

The report, by the ministry for social affairs, warned that without the support of the network of ethnic minority organisations in touch with communities all over the country “the government can no longer respond adequately to rising social tensions”.

Walter Palm, a senior civil servant involved in developing closer links with ethnic groups between 1982 and 2017, described the decision to abandon structured meetings as the political equivalent of “an industrial accident”.

“Migrant groups now have less influence on government policy than ever before,” he said. “That reduces backing for government initiatives and means they’re less likely to succeed because they’re not rooted in the community. Without community support, every policy is doomed to fail.”