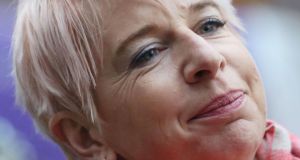 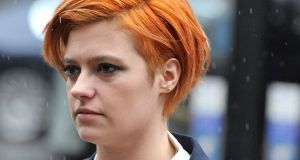 Writer Jack Monroe outside the High Court in central London, where she is claiming damages from controversial newspaper columnist Katie Hopkins over tweets she says caused “serious harm” to her reputation. Photograph: Nick Ansell/PA Wire

A writer is claiming damages from controversial newspaper columnist Katie Hopkins over tweets she says caused “serious harm” to her reputation.

Jack Monroe, a food blogger who also campaigns over poverty issues, is asking a judge at the High Court in London to find that she was “defamed” by the former Apprentice contestant.

At the heart of the action, which began on Monday, is a posting on Twitter from May 2015.

Ms Monroe says the tweet meant she had either vandalised a war memorial, and “thereby desecrated the memory of those who fought for her freedom and had committed a criminal act”, or that she “condoned or approved” of the criminal vandalisation of a war memorial.

Ms Hopkins posted: “ MsJackMonroe scrawled on any memorials recently? Vandalised the memory of those who fought for your freedom. Grandma got any more medals?”

Twitter had erupted after a memorial to the women of the second World War in Whitehall was daubed with the words “F... Tory scum” during an anti-austerity demonstration.

Ms Monroe (28), from Leigh-on-Sea, Essex, also claims a second tweet by Hopkins bore a “defamatory innuendo meaning” that she “approved or condoned the criminal vandalisation of the women’s war memorial in Whitehall during an anti-government protest”.

Her lawyer William Bennett told Mr Justice Warby: “The claimant’s primary case is that by reason of the seriousness of the allegations and the scale of publication, serious harm to reputation has been caused.

“A widely published allegation that someone has either vandalised a war memorial or approved of such an act will inevitably cause serious damage to reputation.”

Mr Bennett said “the libel was a particular affront to her because part of her identity is as a member of a family closely involved with the armed forces”.

Even after Ms Hopkins deleted the first tweet, “she did not apologise or retract the allegation even though she knew it was false”, he said.

Jonathan Price, for Ms Hopkins, told the judge in written argument that her case was that “this relatively trivial dispute arose and was resolved on Twitter in a period of several hours”.

He argued that “no lasting harm, and certainly no serious harm”, to Ms Monroe’s reputation resulted from it.

Mr Price said her case was that “these proceedings are an unnecessary and disproportionate epilogue to the parties’ otherwise forgotten Twitter row”.

Ms Monroe rejected Mr Price’s suggestion that rather than it being the worst thing to happen to her on Twitter, which was her evidence, it was in fact the best thing because it gave her the opportunity to bring the proceedings.

She told the court: “These proceedings have been a nightmare. It has been an 18-month, unproductive, devastating nightmare.

“I did not want to be here today. I have offered several times though my lawyer to settle these proceedings outside court. This is the last thing that I wanted to be doing.”