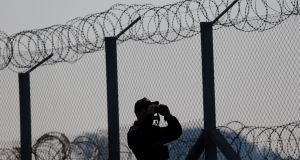 A policeman patrols an area at the Hungary and Serbia border fence near the village of Asotthalom, Hungary, on October 2nd, 2016. Photograph: Laszlo Balogh/Reuters

Hungary has started building a second layer of security fencing to prevent refugees and migrants from crossing its southern borders, and plans to tighten its asylum law further - despite fierce criticism from major international rights groups.

The government of populist prime minister Viktor Orban says the new “smart” fence - equipped with heat-sensitive cameras, motion detectors and other high-tech features - is required to stop all illegal migration and prepare for what Hungarian officials say could be a resurgence in the refugee crisis this year.

It is not clear why Hungary fears a spike in refugees and migrants moving north along the “Balkan route”, but thousands are now living in overcrowded camps in Greece, while an EU-Turkey deal to slash numbers of people crossing the Mediterranean Sea is a hostage to tense relations between Brussels and Ankara.

Mr Orban ordered the first layer of steel fencing to be erected along Hungary’s borders with Serbia and Croatia in 2015, when more than one million people crossed the Balkans en route from Turkey to western Europe.

His hardline stance diverted the main flow of asylum seekers and heralded a tougher line on the crisis that saw the Balkan states officially close their borders to migrants and refugees last March.

Hungary has also led opposition to a German-led plan for EU members to take a quota of refugees. Mr Orban says the mostly Muslim refugees from countries such as Syria, Iraq and Afghanistan threaten the security and culture of Hungary and Europe.

The relatively few refugees and migrants who still reach the Serbia-Hungary border – usually by paying people smugglers – now camp by the fence before being admitted to a “transit zone” for initial assessment of their asylum requests.

Many are simply ejected from the zone back into Serbia, while those who manage to sneak through the fence are returned to Serbian territory without any due legal process if caught by police within 8km of the frontier.

Mr Orban’s government is now proposing that asylum seekers be kept in the makeshift transit zone for the full duration of the asylum process, and that illegal immigrants caught anywhere in Hungary can be expelled automatically to Serbia. Only unaccompanied children under the age of 14 would be exempt from the new rules.

Human Rights Watch and the Hungarian Helsinki Committee have written jointly to the European Commission, urging it to ask the Hungarian parliament to halt passage of a Bill which they say contravenes the country’s international obligations to people fleeing war and persecution.

Amnesty International called the government plan “a new low in Hungary’s race to the bottom on asylum seekers and refugees” and “further evidence that the EU needs to stand firm on Hungary’s flagrant disregard for European and international law”.