Drivers in high-speed car race in Berlin get life sentences 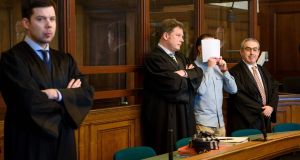 Lawyer for Handi H (with face covered) disputed that participation in such a race amounted to an intention to kill. Photograph: Gregor Fischer/AFP/Getty Images

A Berlin court has imposed life sentences on two men whose high-speed car race through the German capital last year ended in a fatal collision with a 69-year-old motorist.

The two drivers, identified only as Marvin M (25) and Handi H (28), were racing down Berlin’s Kurfürstendamm boulevard in the early hours of February 1st last year at speeds of up to 160km/h.

After ignoring several stop signs, Handi H crashed his Audi sports car into the driver door of a jeep that had the green light and was turning near the KaDeWe department store. The jeep was propelled 70m down the street on its side and the driver died at the scene, which investigators described as a “battlefield”.

The state prosecutor successfully demanded a murder conviction, arguing that the drivers’ speeding “to win a bet and secure an ego boost” had “robbed them of any ability to react”. Prosecutor Christian Fröhlich said the two men had displayed a deliberate intention to cause harm to others with their souped-up sports cars.

“The deadly consequences of such breakneck driving are clear to all motorists,” he added.

The verdict is the first of its kind in Germany, where similar cases in the past have ended with, at most, a manslaughter conviction, a €400 fine or a three-month driving ban.

The two men, who declined to testify, knew each other in passing from a city bar and were both known to police for previous traffic offences. On the day of the incident, they met by coincidence at a traffic intersection, agreed on the race and, when the lights changed to green, sped off.

An eye-witness said the cars zipped passed “at an insane speed, like a high-speed train”.

Politicians and police welcomed the verdict as an important signal against speeding in general, and in particular against the growing number of illegal car races in German cities.

“The verdict shows that the justice system is willing and able to impose significant sentences and to take into account the general preventative effect of jurisprudence,” said Rainer Wendt, head of the German police union.

With the murder ruling, the Berlin court broke new legal ground and appears to have heeded the urging of a Swiss psychologist, who urged a cultural change in how Germany deals with speeding and speeders.

The psychologist, Jaqueline Bächli-Biétry, said that despite 17 traffic offence convictions, the Audi driver “doesn’t see that he contributed to what happened”.

“He still has the feeling that he drives well,” she added. “He has still not been shaken awake.”