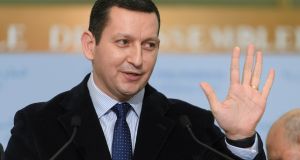 A Saudi-sponsored Syrian opposition group has cast doubt on the Damascus government’s willingness to reach agreement as talks on a peace deal continue in Geneva.

The High Negotiations Committee (HNC), the main opposition group in the talks aimed at bringing an end to Syria’s near six-year-old civil war, said it has not met “a partner seeking peace in Geneva”.

It also accused the government of collaborating with Islamic State, although the Syrian army is currently battling the terror group’s forces north of Aleppo.

Nasr al-Hariri, head of the HNC delegation to the talks, castigated Iran, which supports the government, as a “rogue state”, but said Russia, the mainstay of Damascus, has adopted a more “neutral” policy.

Dr Hariri, a cardiologist, said he hoped to meet Russia’s deputy foreign minister, Gennady Gatilov, and its Middle East director, Sergei Vershinin, on Tuesday, indicating that his delegation intends to remain in Geneva in spite of negative rhetoric.

Russian president Vladimir Putin argued on Monday that the relaunch of the UN-mediated peace talks in Geneva has been made possible by Russian- and Turkish-sponsored meetings on enforcing the Syrian ceasefire, which were held last month in Astana, Kazakistan.

Mr Putin said the Astana process had produced a mechanism to allow the Geneva negotiations to resume after a 10-month break.

Russian deputy foreign minister Mikhail Bogdanov has backed UN mediator Staffan de Mistura’s call for the HNC to form a joint delegation with the Moscow and Cairo platforms, two other opposition groups invited to take part in the negotiations.

Speaking for the Moscow group, Hamza Monzer stressed a common delegation should be “one but not a unified”. The HNC calls for the ousting of Syrian president Bashar al-Assad; the Moscow and Cairo platforms seek democratic reforms and administrative decentralisation.

Mr Monzer said the intra-Syrian talks should be direct between the government and the opposition, a demand put forward by the HNC before the Geneva talks began last week. The Cairo Platform agrees with this stance.

Cairo Platform head Jihad Makdissi told The Irish Times that there would be “no major breakthrough [in the current round], but it provides a chance to maintain the political momentum of the Geneva process.”

“Russia’s role is essential in Syria, ” he said, adding that least year’s “rapprochement between Russia and Turkey has led to a more moderate approach of the armed groups.”

Mr Makdissi’s independent group was established during talks in Cairo and “partners with Egypt”, but receives no financial aid from any external source.

All three opposition factions condemned Saturday’s attacks on military facilities in Homs that killed up to 42 people and were claimed by an al-Qaeda affiliate, Jabhat Fatah al-Sham.