Police take on Islamophobic trolls after car attack in Heidelberg 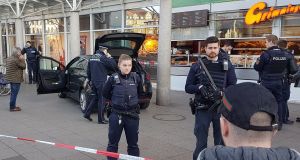 Police officers guard a car in front of a business building in Heidelberg, western Germany, where a driver ploughed into pedestrians before being shot by police on Saturday. Photograph: Rene Priebe/EPA

Minutes after the attack on Saturday afternoon, the trolling began. A 35-year-old man driving a rented car crashed into pedestrians in the southern German university city of Heidelberg, killing a 73-year-old passerby. Leaving two others injured at the scene, the driver bolted from the car, wielding a knife. He was soon cornered by police, shot in the stomach and taken into custody.

As the perpetrator underwent an emergency operation and police worked to establish his identity, the trolls were already on the case.

“According to friends at the police, the shot perpetrator from Heidelberg is a so-called #refugee,” tweeted one.

Local police shot back on Twitter immediately: “Nope, he’s not.”

Another Twitter troll called “ludwig felsenkiefer” demanded to know about the perpetrator’s appearance, writing: “Tell the full truth or shut your mouth.”

To which the police replied: “Forgotten your childhood manners or never had any?”

All evening, as the investigation continued, so did the trolling. One troll went to the trouble of copying the official press release from the police website, adding a new line about the perpetrator “shouting in Arabic”. After uploading a screenshot of this version, with the fictitious additions highlighted, the troll declared this the “proof” of a cover-up.

By 9pm on Saturday, the avalanche of tweets about a supposed Islamist perpetrator continued, including one from an account called “Brexit Means Brexit”, reading in English: “he f**k German. He’s a f**king Muslim. F**k the lot of them out of the West.”

To which local police intervened in English: “WTF are you talking about?”

Even after the identity of the car’s driver emerged – he was a 35-year-old German national – the trolling continued.

One conceded that the perpetrator was a German, adding: “with immigrants one would have kept that quiet for months”.

Again the police intervened: “No, ‘one’ wouldn’t have, at least not us.” And later: “For once and for all: Suspected perpetrator German WITHOUT migration background.”

“Some things can’t be answered with political correctness or police correctness,” he told the Süddeutsche Zeitung, announcing plans to examine all tweets from the evening, with a view to pressing charges against the problematic posters.

The 35-year-old driver, shot in the stomach, is recovering in a Heidelberg prison hospital. Two injured passersby were treated at the scene.

Amid a social-media buzz about reports of asylum seeker attacks on German women, some real federal interior ministry figures show that 560 asylum seekers, including 43 children, were injured in attacks last year. In addition, some 217 aid-agency workers and volunteers were also attacked.

The figures, though preliminary, show a slight reduction in absolute terms on the number of attacks in 2015, when 1,031 attacks were carried out. However, almost 900,000 people filed for asylum in Germany in 2015, compared with about 200,000 last year.

In the last quarter of 2016 alone, police recorded 525 attacks nationally on asylum seekers or their accommodation.

“These attacks are almost 10 a day,” said Ulla Jelpke, interior spokeswoman for the opposition Left Party. “Does there have to be deaths before right-wing violence is viewed as a central problem of domestic security?”