Tributes paid to Labour MP Gerald Kaufman after death at 86 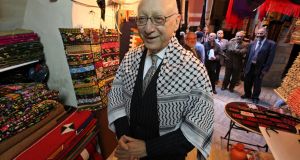 Gerald Kaufman, who has died aged 86, on a visit in 2010 to the Palestinian Legislative Council in Hebron, in the Israeli-occupied West Bank. Photograph: Abed al-Hashlamoun/EPA

Politicians from all parties have paid tribute to Labour MP Gerald Kaufman, who has died aged 86. Sir Gerald was one of the sharpest and most acerbic debaters in the House of Commons, as well as its oldest member. Gay and Jewish, he was an outspoken critic of Israel and a scourge of the Labour left who famously described Michael Foot’s 1983 election manifesto as “the longest suicide note in history”.

Jeremy Corbyn expressed sadness at Kaufman’s death, describing him as “an iconic and irascible figure” in the Labour Party.

“He loved life and politics. I will deeply miss him, both for his political commitment and constant friendship,” he said.

Kaufman’s death will trigger another byelection in a Labour-held seat, following last week’s loss of Copeland to the Conservatives, a defeat that has renewed questions about Mr Corbyn’s leadership. In a statement announcing his death, Kaufman’s family appeared to criticise the direction Labour has taken under its current leader.

“Sir Gerald dedicated his life to serving those who he believed would benefit most from a Labour government and Labour values in action. He believed that policy and principle without power were simply not enough to deliver the better life that he fought for on behalf of his constituents for almost 50 years,” the statement said.

Kaufman was born into a family of Jewish immigrants from Poland, where his grandmother was shot dead by a German soldier as she lay ill in bed. He worked as a journalist on the Daily Mirror before becoming an aide to Labour prime minister Harold Wilson. He entered parliament in 1970 and held a number of junior ministerial posts before Margaret Thatcher’s 1979 election victory condemned Labour to opposition for almost two decades.

A scourge of the Conservatives, he called Mrs Thatcher “the thieving magpie” and dismissed her successor, John Major, as “the man who came to dither”. An enthusiast for Hollywood films and Broadway musicals, he was, as Labour MP Chris Bryant recalled on Monday, the only man to have started a speech to the parliamentary Labour Party with the words: “As Bette Davis once said to me . . .”

Despite his dandified appearance, however, Kaufman enjoyed political combat in its rawest form, telling one party colleague: “Always remember the golden rule of politics: never kick a man until he’s down.”

He reserved his strongest invective for Israel, accusing its leaders of war crimes and calling for sanctions similar to those imposed on South Africa during apartheid. In April 2002, he condemned Israeli prime minister Ariel Sharon as a war criminal and accused him of hijacking the symbol of Jewish identity.

“It is time to remind Sharon that the Star of David belongs to all Jews, not to his repulsive government,” he said. “His actions are staining the Star of David with blood. The Jewish people, whose gifts to civilised discourse include Einstein and Epstein, Mendelssohn and Mahler, Sergei Eisenstein and Billy Wilder, are now symbolised throughout the world by the blustering bully Ariel Sharon, a war criminal implicated in the murder of Palestinians at the Sabra and Shatila camps and now involved in killing Palestinians once again.”