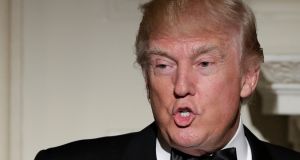 US president Donald Trump speaks during the Governor’s Dinner in the State Dining Room at the White House in Washington on Sunday. Photograph: Reuters

President Donald Trump’s nominee for secretary of the Navy withdrew from consideration Sunday, saying that meeting the government’s ethics guidelines would require too great a financial sacrifice.

Philip Bilden, a former military intelligence officer who ran the Hong Kong branch of a private equity firm, said in a statement that he had informed defence secretary Jim Mattis that he did not want to continue to seek confirmation a month after he had been named for the post.

It was the latest case in which wealthy businesspeople whom Mr Trump has favoured for government jobs have been tripped up by the demands of avoiding conflicts of interest.

On February 3rd Vincent Viola, a billionaire Wall Street trader and Trump’s choice for secretary of the army, withdrew because he decided it was too difficult to detach himself from his business interests.

Mr Bilden said in a statement that he fully supported the president’s agenda. But he added, “After an extensive review process, I have determined that I will not be able to satisfy the Office of Government Ethics requirements without undue disruption and materially adverse divestment of my family’s private financial interests.” He did not elaborate.

CBS News reported on February 18th that Mr Bilden was likely to withdraw his nomination, but Trump administration officials denied it.

Sean Spicer, White House press secretary, said on Twitter that CBS’s sources were “wrong.” Mr Mattis called Mr Bilden’s decision disappointing but said he understood it, saying it was “driven by privacy concerns and significant challenges he faced in separating himself from his business interests.”

Mr Bilden, the son of a naval officer, attended Georgetown University on an ROTC scholarship and served from 1986-96 in the Army Reserve as an intelligence officer.

He made his fortune in a 25-year career at HarbourVest Partners, first in Boston and then in Hong Kong.

1 Man unidentified in psychiatric hospital for 30 years may have DNA taken
2 Covid-19: One death and 363 further cases confirmed in State
3 ‘Insane’ gathering of hundreds of students in Galway condemned
4 US election: Everything you need to know about Tuesday’s presidential debate
5 Student feels ‘hopeless’ after having six Leaving Cert marks downgraded
Real news has value SUBSCRIBE