Iran struggles to fight Covid-19 as US sanctions hurt healthcare

Aid flows to Tehran from Emirates, Kuwait and Qatar amid reported 1,300 deaths 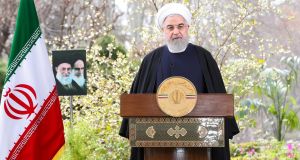 The Emirates, Kuwait and Qatar have stepped up to provide Iran with cash and medical aid as the Trump administration has ramped up punitive sanctions which impede Tehran’s efforts to fight coronavirus.

Britain, China and Russia have called for sanctions to be eased to enable Iran to obtain test kits, protective gear for medics, ventilators and medications. Iran has reported 18,400 cases and 1,300 deaths, but the tally is feared to be far greater.

Having spread to the Gulf, Saudi Arabia, Iraq, Lebanon and Jordan, the virus, if not contained and ultimately eliminated, could make Iran a continuing vector for the region and its neighbours.

Russia deemed sanctions “anti-human” and China, while fighting contagion, has sent test kits and experts. US scholars and former diplomats have urged Tehran and Washington to engage in positive “virus diplomacy” to save lives.

Secretary of state Mike Pompeo said the US was prepared to provide aid but appeared to link it to the release of US prisoners. On the occasion of the Persian new year, ex-US navy officer Michael White has been furloughed, but he cannot leave Iran, and three Americans remain in detention. One US citizen is missing in Iran.

The Trump administration reimposed sanctions after withdrawing from the agreement on the Iran nuclear deal, in which country signed up to curbs on its nuclear programme in exchange for a lifting of sanctions.

By imposing fresh sanctions during the global pandemic, the White House signalled it does not intend to deviate from its campaign of “maximum pressure” on Iran to obtain US demands. The new measures target firms and individuals trading in petroleum products.

Although sanctions are not supposed to block food and medicine, governments, banks and firms fear US financial punishment for supplying Iran. Consequently, Human Rights Watch says the result “has been to deny Iranians access to essential medicines and to impair their right to health”.

The latest US measures followed an appeal by Iran’s foreign minister Javad Zarif for medicine and equipment to battle the virus and Tehran’s application for a $5 billion (€4.7 billion) International Monetary Fund loan to tackle the crisis, a request the US could block.

While sanctions have degraded Iran’s healthcare sector, the authorities are to blame for the outbreak. They initially denied the virus had appeared in the Shia holy city of Qom and failed to close its shrine, quarantine its inhabitants and prevent pilgrim visits.

When the infection was finally addressed, President Hassan Rouhani sparred with Revolutionary Guards commanders over management of the outbreak.

To avoid blame, Tehran continues to downplay the seriousness of the situation and has accused the US and Israel of sowing the virus with the aim of prompting the populace to demand regime change.

Tehran does not want to admit the infection arrived from China, which has extensive business interests in Iran. Chinese engineers and workers are involved in major infrastructure projects in Qom and elsewhere.

While sanctions have forced most countries to shun Iran, Tehran and Beijing have developed extensive economic ties and a strategic partnership.