Coronavirus in New York: ‘I never thought I’d see the city so empty’ 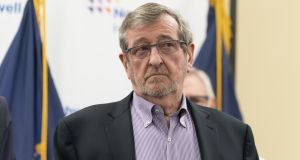 Speaking by phone from his office in Long Island, New York, he is looking out at the empty highway below. “There are no cars, no people. The city is effectively closed. I never thought I’d see New York city so empty.”

Dowling has emerged as a key figure in America’s fight against coronavirus. The Limerick man was picked by New York’s governor, Andrew Cuomo, to help lead the state’s Covid-19 strategy.

New York is at the centre of the US’s deepening coronavirus crisis. More than 7,000 cases have been reported, with the number rising.

As the crisis began to emerge as a major public health concern, he was approached by Cuomo to help devise a strategy for the state.

Dowling has experience of working with state government. He worked for Cuomo’s father, Mario, when he was governor of New York, as a top health official, including as health and human services secretary.

With the emergence of coronavirus, he was approached in his capacity as Northwell chief executive officer to help tackle the crisis.

Like fellow Irishman Michael Ryan, head of emergency programmes at the head of the World Health Organisation (WHO) , Dowling has become one of the public faces of the response to the crisis, appearing on cable news channels to explain New York’s strategy in combating the virus.

According to Dowling, the main focus at this juncture is testing and preparation. “We have to do as much prevention, as much testing as possible, so that when the big surge comes we are ready,” he says.

New York was one of the first states to announce business closures – it also moved early to set up the country’s first containment area, around the town of New Rochelle north of the Bronx, which reported a cluster of cases. Drive-through testing facilities have now been introduced in New Rochelle and around the state, while Northwell has been approved to conduct manual coronavirus tests at its Long Island laboratories.

The provision of beds is also a key concern. But as Dowling points out, “that’s not the hard part”.

“We have to make sure we have the right complements of staff, as well as sufficient supplies. That quite frankly is the biggest issue because our stockpile of resources is not as big as it should be. A lot of the equipment, masks for example, have been made in China and the whole supply chain has been disrupted,” he says.

Similarly, while he welcomes the decision by the federal government to sanction the deployment of a US navy hospital ship to New York – it is expected to dock off Manhattan in the coming weeks – he notes that it is not staffed. “That’s a potential problem. Staff will be stretched, so while I’m not against it, and it’s a good resource, we need the staff.”

As is the case in Ireland, Dowling and his staff are seeking the support of retired healthcare workers. “We have a long list of people who we can reach out to when we need,” he says.

Dowling is also keeping a close eye on developments in Ireland. He is on the board of the Smurfit School of Business at UCD and involved with both the University of Limerick and University College Cork, where he did his undergraduate degree while spending the summers in America working in construction.

“I’m in touch with my family all the time. I know that Ireland has basically closed down, and that’s a good thing. It’s inconvenient, but it’s the right thing to do.”

He believes that leadership is one of the key attributes needed in a national emergency such as this. “When you’re in a leadership position you got to prepare for the worst but you have to remain calm,” he says. “I’m confident that ultimately this will pass, and we will look back on this period. But what it does demonstrate is that when you need to take action in a drastic way, and shut down a city like New York, you can do it. It’s remarkable.”