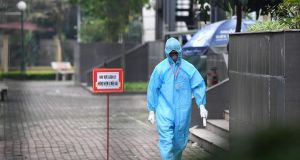 A health worker wearing a protective suit and face mask walks inside a quarantine area in Thanh Tri district in the suburbs of Hanoi on Friday. Photograph: AFP via Getty Images

The death toll in Italy from the outbreak of coronavirus has leapt by 627 to 4,032, officials said on Friday, an increase of 18.4 per cent – by far the largest daily rise in absolute terms since the contagion emerged in the country a month ago. On Thursday, Italy overtook China as the country to register most deaths from Covid-19.

The foreign ministers of South Korea, China and Japan held a video conference on Friday to discuss co-operation on the coronavirus pandemic amid growing concern over the number of infected people arriving in their countries from overseas.

Though the outbreak erupted in China in December, and South Korea at one stage had the second-most infections, both subsequently succeeded in stifling domestic transmission of the virus. The number of cases in Japan has been far smaller, but Tokyo has the extra worry of whether to press ahead with hosting the Olympics this summer.

US president Donald Trump has called off the G7 meeting at Camp David scheduled for June, citing the ongoing coronavirus pandemic, the White House said.

The world’s richest nations have poured unprecedented aid into the global economy as coronavirus cases ballooned in the new epicentre Europe, with the number of deaths in Italy outstripping those in mainland China, where the virus first emerged.

In Spain, health authorities said 1,002 people have died in the country from the outbreak, while infections have risen by 16 per cent in 24 hours to reach 19,980. Spain is the second-hardest hit country in Europe, behind Italy, and is in its first week of a lockdown. More than 10,000 people have been admitted to hospital due to the virus, including more than 1,000 in intensive care units.

Spanish authorities also said on Friday they would turn a Madrid conference centre into a giant makeshift military hospital for thousands of coronavirus patients.

French health authorities reported 78 new deaths from coronavirus on Friday, taking France’s total death toll to 450, an increase of 21 per cent. The death toll rose less sharply than in the two days before, as extra measures to enforce the national lockdown were locally announced.

During a press conference, health agency director Jérôme Salomon added that the number of cases of the virus had risen to 12,612, up from 10,995 on Thursday, which is a rise of 15 per cent in 24 hours.

British prime minister Boris Johnson told cafes, pubs and restaurants across Britain to close on Friday night and to stay shut indefinitely to help slow the spread of coronavirus.

Meanwhile, scientists in the UK advised that social distancing measures will need to be in place for most of a year at least in order to control the spread of Covid-19, as the UK death toll from the virus hit 177.

Swiss authorities are banning groups of more than five people in public across the country, and police can fine people who flout the new rules 100 francs (about €95).

Germany said it may enforce a nationwide curfew if the country’s 83 million people fail to keep their distance from each other this weekend.

The German state of Bavaria will impose general restrictions on going outside for two weeks in a bid to slow the spread of coronavirus, state premier Markus Soeder said on Friday.

Restrictions imposed by some European Union countries at their borders are disrupting food supplies, industry representatives and farmers said on Thursday.

The EU is to relax spending rules for its 27 members in response to the virus, allowing them to open up the fiscal floodgates without fear of running afoul of the bloc’s strict regulations on debt and deficit targets. It will also give governments leeway to provide aid to companies and liquidity support for small businesses, and potentially banks.

Mainland China reported zero locally transmitted cases of the coronavirus for the second straight day. China reported 39 new cases of coronavirus on Thursday, all of which had arrived from abroad. The total number of confirmed imported infections has reached 228.

Japan has had 970 domestically transmitted cases of coronavirus and 34 deaths, excluding cases from a cruise ship moored near Tokyo last month.

Indonesia likely has far higher numbers of cases than reported due to limited testing and needs to consider tougher measures like lockdowns, the Red Cross said. Indonesia’s capital Jakarta has declared a state of emergency for the next two weeks in the city, as the death toll in the country from the virus climbed to the highest in southeast Asia. Indonesia has so far confirmed 369 coronavirus cases and 32 deaths.

Malaysian authorities are seeking about 2,000 Rohingya for checks after they attended a Muslim gathering on the outskirts of Kuala Lumpur. More than 670 cases in southeast Asia have been linked to the gathering.

More than 13,000 people across the United States have been diagnosed with the illness and 200 have died, with the largest numbers so far in Washington state, New York and California.

US president Donald Trump said “non-essential” travel will be suspended across the US border with Mexico.

California’s governor on Thursday issued an unprecedented statewide “stay at home order” directing the state’s 40 million residents to hunker down in their homes for the foreseeable future.

New York state on Friday told all non-essential workers to stay at home, while pleading for more medical personnel and supplies to treat coronavirus cases that could overwhelm hospitals.

Four members of a New Jersey-based family, the Fusco family, reportedly died within days of each other as a result of the virus.

Canadian prime minister Justin Trudeau said he expects the closure of the US-Canada border to come into effect overnight on Friday. He later added that Canada will no longer accept irregular migrants trying to cross the border with the US and will instead return them to US authorities.

Panama registered 137 cases of coronavirus infection in total, up from 109 a day earlier.

The Honduran government said the number of registered cases of coronavirus infection in the Central American country had risen to 24.

Haiti’s government on Thursday declared a state of emergency, closing the borders of the Americas’ poorest nation and imposing a curfew after authorities detected the first two cases of infection.

Argentina has begun a mandatory quarantine, restricting people to their homes from midnight on Friday until March 31st.

Saudi Arabia has so far confirmed 274 infections and no deaths, and it suspended all domestic flights, buses, taxis and trains for 14 days starting Saturday.

Coronavirus is killing one person every 10 minutes in Iran, an Iranian health ministry spokesman tweeted on Thursday, as its death toll climbed to 1,284.

Egypt will shut all cafes, malls, sporting clubs and nightclubs until March 31st.

Africa will likely see cases rise in coming weeks as some cases escape detection, the head of the Africa Centres for Disease Control said on Thursday, when Chad confirmed its first case.

The island nation of Madagascar confirmed its first three cases of coronavirus on Friday, its president said in a televised statement. Madagascar, one of the world’s poorest nations, halted all international flights this week to try to prevent cases of the virus.

South African authorities announced they would erect a fence along its border with Zimbabwe to prevent illegal immigrants from entering and spreading the virus.

Cases in South Africa have jumped to 202, the most in the sub-Saharan region. The country’s largest airport, OR Tambo International Airport, has announced foreigners would not be allowed to disembark.

Australia is closing its borders to foreigners and pumping about A$100 billion into the economy.

Air New Zealand said on Friday it was offered a NZ$900 million lifeline by the government. – Agencies