Cancellations force 20% of hotels in North to close 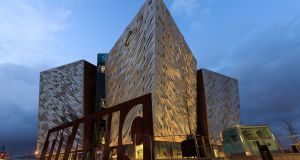 Cancellations have forced around 20 per cent of hotels in the North to close and lay off around 2,500 employees, according to the chief executive of the Northern Ireland Hotels Federation .

Janice Gault has also warned that further job losses and closures are inevitable in the “coming days”.

Ms Gault said the hotel sector supports around 15,000 jobs and but it has been significantly impacted by the coronavirus crisis which she said has clearly resulted in “cancellations in all aspects of business and considerable pressures on all aspects of trading”.

She said hotels in Northern Ireland are in desperate need of support, particularly for their workforce.

“Hotels have a payroll in the region of £30 million per month, make a considerable contribution to the local economy but more importantly the means by which our valued employees support their families.

“Government support on a national level has been inadequate with little leadership displayed at all levels,” Ms Gault warned.

One of the North’s largest hospitality groups, the Beannchor Group, has already closed some of its hotels but others, like the family owned Hastings Hotels group, are monitoring developments in the North and are not publicly commenting on how their operations have been impacted by COVID-19 and the impact it has had on the North’s tourism sector.

But Tourism NI, the government agency which markets Northern Ireland as a destination to domestic tourists, is not holding back on its concerns.

It held a special meeting in Belfast this week to discuss the “severe economic impact of Covid-19” and has warned that the North’s tourism industry now faces “unique challenges”.

The closure of major draws like Titanic Belfast, which is estimated to be worth £60 million a year to the Northern Ireland economy, underlines the extent of those challenges.

The organisation which manages the Titanic attraction declined to comment on the current position regarding its workforce. More than 200 people work at the attraction.

In a statement TBL International said: “The health and well being of our guests and staff are of the utmost importance and following government guidance in relation to social distancing in public venues amidst the Covid-19 (coronavirus) outbreak, TBL International has taken the decision to close  all of its venues, including Titanic Belfast, SS Nomadic and TEC Belfast”.

But while the North’s tourism sector is struggling many of Northern Ireland’s biggest food producers, from Mash Direct to Irwin’s Bakery, have launched recruitment drives to boost their production lines to cope with the demand from shoppers during the crisis.

Brian Irwin, chairman of industry group, NIFDA (Northern Ireland Food and Drink) and chairman of Irwin’s Bakery said food production companies in the North are being “very pro-active” in response to Covid-19.

Mr Irwin said that companies are keen to recruit former hospitality workers who already have the skills required to work in food production.

“We’re planning for various scenarios, whether it is being faced with a shortage of workers who might have to self isolate if they become ill, or who have to take precautionary measures for themselves and their families we need to be able to work on.

“We have a responsibility to our communities – to the people expecting their daily food whether it is fruit, vegetables, bread, meat or dairy all these industries have to keep on producing and delivering and people shouldn’t be concerned because food will keep on being produced.”

He said the increased demand from consumers for food products reflects a significant change in buying patterns.

“It is not just because some people have been stockpiling. Normally 20 per cent of food consumption is outside the home but because there is less food on the move – people are no longer eating out- there is lots more in-home eating and that is why there is a big increase in demand for food in supermarkets,” Mr Irwin added.