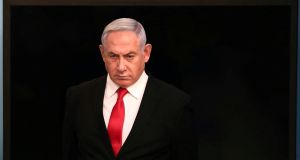 Israel has come up with a novel solution to its critical shortage of kits to test the coronavirus: call in the Mossad.

The renowned intelligence agency on Thursday delivered to labs 100,000 new kits that had been collected overseas in an overnight operation.

Israeli officials refused to confirm details about the operation but insisted the kits had been purchased and not stolen and said four million additional kits will be delivered in the next few days as part of the operation, which is being overseen by Mossad director Yossi Cohen.

According to an Israeli TV news station, the kits came from two countries which do not maintain diplomatic relations with Israel.

Statements from the prime minister’s office and the health ministry dismissed comments from one health official who claimed the kits were unusable because they were missing swabs.

Anonymous senior officials were quoted as saying: “the Mossad brought what it was asked. The Mossad will punctuate better the need with the health ministry. The secret route exists and, through it, we will continue importing whatever is needed”.

Health ministry director general Moshe Bar Siman-Tov thanked the Mossad, as well as all other defence branches helping to confront the medical crisis. He said the test kits received on Thursday were “important and functional kits” which the country requires for coronavirus tests.

“Israel is in a state of war and during wartime you work alongside everyone to win. Israel is using all its means, all its strengths and all its minds to co-operate and face this great challenge,” he said.

Israel has more than 500 confirmed cases of coronavirus but, as of Thursday, still no fatalities.

Aggressive steps have been taken to control the spread of the virus, including closing schools and public spaces; requiring anyone arriving in the country to self-quarantine for 14 days; banning the entry of foreigners; turning hotels into hospitals for coronavirus patients; and using anti-terror cellphone technology to track people’s movements.

However, the lack of testing equipment was identified as the country’s Achilles heel in the struggle to combat the virus and prime minister Binyamin Netanyahu said this week that he wants Israeli labs to reach 5,000 daily tests.

Israel’s ambulance service is scheduled to open its first drive-through testing centre in Tel Aviv by Sunday. Five more are expected to be opened across the country within a few days.

The Israeli army and healthcare experts, along with international aid groups, are also scrambling to bolster health capabilities in the West Bank and Gaza, where there is only one coronavirus testing kit for 1.8 million people.

The Palestinian Authority has confirmed more than 40 cases and Bethlehem remains in lockdown.