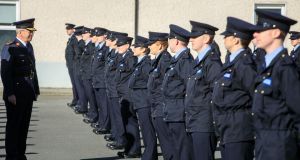 Garda Commissioner Drew Harris has said it will only be a matter of time before organised crime gangs attempt to exploit the coronavirus crisis.

Mr Harris insisted the force would be ready to respond to such a development and denied it was a risk to fast-track 319 recruits through their training at the Garda College in Templemore, Co Tipperary in order to bolster the numbers available during the pandemic.

The new officers now have full policing powers, despite some of them having only started their training weeks ago.

“They are gardaí,” the commissioner said of the recruits, who were sworn in at a ceremony in the college on Friday at which social distancing precautions were followed.

“When they go out into the stations...they’ll be supported by experienced gardaí in terms of tutors and supervisors...In effect, they are getting their practical training and they’ll be brought back here to finish off their academic (training)...We’ve prepared them as best we can.”

Mr Harris said he did not envisage the swift progress of the recruits through the college posing difficulties.

“We are very mindful of that the threat from organised crime carries on and indeed it’s only a matter of time before they try to exploit the situation, particularly people’s fears,” he said.

“We want to be able to combat that. You see from the work we have done through the week - we’ve seized drugs, we’ve seized firearms. So that work carries on.”

Following the attesting of the student gardaí on Friday the Garda College will close for a period and the members who work there was tutors will return to frontline policing. Overall 443 Garda members are being deployed and the fast- tracking of the recruits into the force proper has seen the total strength of the Garda rise to 14,758, a record high number.

The Garda College, which has a large accommodation block, is being made available for use as a healthcare facility in the response to Covid-19, if required.

The force is now mounting a special operation, based on officers working 12-hour shifts, to maintain law and order and reach out to vulnerable and isolated people.

Garda members could also be called upon to enforce measures in the emergency legislation passed by the Dáil on Thursday. The Health (Preservation and Protection and other Emergency Measures in the Public Interest) Bill gives the force powers to make businesses close, break up public gatherings and send people into isolation.

Taoiseach Leo Varadkar, who joined Mr Harris and Minister for Justice Charlie Flanagan at the ceremony in Templemore, said he was very hopeful the new powers would not be needed.

“In Ireland policing has always been by consent, never by coercion,” he said. “And I hope that is never going to change as a consequence of this crisis.”

Asked if he envisaged the very strict lock down measures being enforced in some continental European countries would be repeated in Ireland, he said he did not believe that would be the case.

“I think the culture in continental countries, like France, and in Asian countries is different to Ireland,” he said. “In Ireland we tend to pull together in times of difficulty. And in this emergency I have seeing enormous community spirit and good hygiene and social distancing. I’m hoping we aren’t going to need the kind of authoritarian response that has been the case in other countries. But we need to have those powers on the books just in case.”

Mr Varadkar said the fact there were two jurisdictions on the island did “create difficulty”.

“There’s no denying that. There are differences in the kind of restrictions being put in place north and south of the border,” he said.

“But I think as the week has gone by we’ve seen more alignment...And I think we just need to keep in close contact, working with the (Northern) Executive and the British government.”