Iran rolls back on nuclear agreement 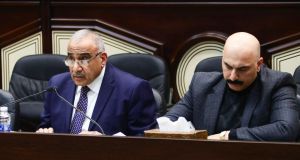 Iran moved farther away from its commitments under the Iran nuclear deal, while US president Donald Trump warned he could punish Iran in a “disproportionate manner” as the fallout from last week’s killing of a top Iranian official reverberated across the Middle East.

Hundreds of thousands of people marched in Iraq and Iran over the weekend to mourn the killing of General Qassem Suleimani who was targetted by a US drone strike last Friday.

Yesterday, Iran announced it was rolling back its remaining commitments under the 2015 nuclear accord. While the state will continue to cooperate with the International Atomic Agency, its refusal to comply with uranium enrichment levels may bring it closer to producing a nuclear bomb.

Earlier in the day, the Iraqi parliament voted to expel US troops from the country.

Iraqi prime minister Adil Abdul-Mahdi proposed a resolution to end all foreign troop presence in the country – signalling a growing backlash in Iraq against Friday’s drone strike at Baghdad Airport which killed Suleimani as well as a top commander of an Iranian-allied militia group.

....targeted 52 Iranian sites (representing the 52 American hostages taken by Iran many years ago), some at a very high level & important to Iran & the Iranian culture, and those targets, and Iran itself, WILL BE HIT VERY FAST AND VERY HARD. The USA wants no more threats!

However, the bill – which is opposed by dozens of Kurdish and Sunni representatives in parliament – has not yet been signed into law.

As tensions remained high, one US serviceman and two Department of Defense contractors were killed in an attack on a US base in Kenya. Rockets were also fired in the Green Zone area of Baghdad near the US embassy, though no casualties were reported.

Mr Trump escalated his rhetoric over the weekend warning that the US could strike 52 Iranian sites “very fast and very hard” if provoked.

“Let this serve as a WARNING that if Iran strikes any Americans, or American assets, we have targeted 52 Iranian sites (representing the 52 American hostages taken by Iran many years ago), some at a very high level & important to Iran & the Iranian culture, and those targets, and Iran itself, WILL BE HIT VERY FAST AND VERY HARD,” he tweeted from his Mar-a-Lago residence in Florida. “The USA wants no more threats.”

US secretary of state Mike Pompeo defended the president’s comments, stating that America will behave “lawfully”.

“We always have, and we always will,” he said. “We’ve told the Iranian regime, enough. You can’t get away with using proxy forces.”

Suleimani’s body was flown back to Iran yesterday, and will be buried in the general’s his home town of Kerman tomorrow.