John FitzGerald: New protectionist regime is good for neither US nor the rest of the world 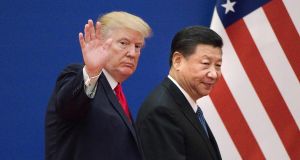 Since 2016, the Trump administration has pursued a strong protectionist policy, raising tariffs, first against neighbours Canada and Mexico, and more recently against a range of countries including the European Union and Ireland. However, the most prominent target of recent US ire has been China.

The effect of this protectionist policy has been a significant slowdown in world trade. Economies such as China that are particularly dependent on trade with the US have seen a slowdown in their economies, which has propagated lower growth across the world.

Having targeted Chinese trade in 2019, it seems likely that 2020 may see a shift in US focus to trade with Europe. This could leave Ireland and Germany in the firing line as we both export more goods to the US than we import.

There is no economic logic to the approach taken by the US as it focuses on the balance of trade in goods between the US and individual countries, rather than the overall balance of payments including services. Trade in goods is only half the story – in the US, sales of services such as software, insurance or Hollywood are a huge part of the picture. As recent Central Statistics Office figures show, our surplus in trade in goods with the US is offset by Ireland importing more services from them.

Successive rounds of US tariffs have inspired extensive research on their economic impact, and on who effectively pays the new tariffs. One paper by Harvard and Chicago economists shows that the effective burden of the tariffs has fallen on US importers, rather than Chinese exporters. Although those selling to the US from China have seen a fall in the volume of their exports, their profit margin on those exports has not changed.

By contrast, the retaliatory tariffs on US exports have resulted in US producers paying about half of the foreign tariffs. This asymmetry in the incidence of the tariffs arising from the US-initiated trade wars does not favour the US.

The reason why US producers pay the foreign tariffs on their exports while foreign producers can pass tariffs on to US importers is that the goods targeted by countries such as China are ones such as agricultural produce, where alternative supplies can be sourced from many countries. By contrast the US has targeted goods, such as washing machines, which are produced by a few suppliers, so the US either has to pay the tariff or do without.

This US experience shows that any tariffs that might be imposed on Irish goods, whether due to US action or to Brexit, would have the biggest impact on agricultural producers. Producers of pharmaceuticals are selling a unique product and the buyer, if they want the product, will have to pay the price demanded, including any tariffs.

A paper that examined US tariffs on washing machines has shown how tariffs can have unexpected effects on trade patterns. Originally, most of the washing machines sold in the US were manufactured by Korean companies. Initially, these Korean imports were targeted by tariffs.

However, Korean manufacturers then moved production to China, where costs were lower, as well as, at the time, facing lower tariffs. Cheaper Chinese manufacturing resulted in an actual fall in US washing machine prices.

With the EU and Ireland likely next on the hit list, this is bad news for the future

More recently, the US has placed big tariffs on washing machines coming from China. While in 2015 the US imported three million machines from China, as a result of the tariffs imports had almost ended in 2017.

By contrast, imports of washing machines from Thailand and Vietnam rose from almost zero to more than three million units between 2015 and 2017. Because Korean producers have plants in many countries, they have been able to shift production and avoid tariffs.

This research has also calculated the impact of US washing machine tariffs on the American economy. It shows that the cost to US consumers of the latest round of more general tariffs has been higher washing machine prices. However, the number of US jobs created by the protectionist regime has been very small. It is estimated that American consumers are paying more than $800,000 a year per job created in the US – an exceptionally high price given that full-time US employees are paid on average $50,000.

The lessons from the new US protectionist regime is that it is neither good for the US nor good for the rest of the world. With the EU and Ireland likely next on the hit list, this is bad news for the future. That is unless US policy, or its president, changes by the end of this year.