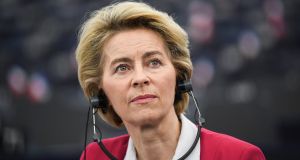 Boris Johnson should reconsider his refusal to extend the 11-month timeframe available for agreeing a deal on the UK’s future relationship with the EU after Brexit, Ursula von der Leyen has suggested.

The European Commission president said she had “serious concern” over the limited time available for the negotiations and emphasised the need to keep all options open.

“It’s not only about negotiating a free trade deal but many other subjects,” Ms Von der Leyen said in an interview with the French newspaper Les Echos. “It seems to me that on both sides we must ask ourselves seriously if all these negotiations are feasible in such a short time.”

If the UK leaves the EU on January 31st as scheduled it will remain in the bloc’s customs union and single market until the end of 2020, with an option to stay within those arrangements for a further two years.

An Irish Government spokeswoman said that the focus should be on the “content, not timing” of a future EU-UK trade deal after Britain leaves the economic bloc.

“The EU has been clear that it will work hard to progress the negotiations as quickly as possible,” said the spokeswoman.

“But we should be clear that the over-arching priority is to achieve an agreement that works as well as possible and that gives us the strong possible foundations for a positive EU-UK relationship for years to come.”

Tánaiste Simon Coveney said Boris Johnson might regret tying himself to the 11-month deadline to agree a trade deal when the UK has the option to extend for a year or two years.

“It is effectively tying their own hands,” he said in an interview with TheJournal.ie.

The withdrawal agreement provides for a “moment of truth” on July 1st, by which time both sides will need to have agreed on prolonging the transition period or face running out of time.

Should there not be a deal in place at the end of the transition period on, for example, trade, the UK would face major disruption to its economy, with tariffs and quantity restrictions being immediately applied to goods being sold into the EU market.

Ms Von der Leyen, a former German defence minister, said the risks for both sides meant an extension of the transition period could not be ruled out.

“I believe that it would be reasonable to review things in the middle of the year, if necessary to see if an extension is needed,” she said.

Earlier this week, the Guardian revealed that London is expected to co-host the next phase of the Brexit negotiations.

A leaked EU document lays out the key areas of co-operation which will be the subject of negotiation once the withdrawal agreement is ratified and the UK has withdrawn from the bloc at the end of January.

According to the paper, EU diplomats representing the member states will on January 10th look at the issues involved in maintaining a free flow of data after Brexit and allowing the UK’s financial services sector to continue to operate within the EU through a decision on the “adequacy” of UK regulation in those two areas.

Later in that week, the internal discussions will move on to trade in goods and services and the arrangements for intellectual property and public procurement.

On January 14th, the diplomats will scope out their position on fisheries and on a level playing field under which the UK would sign up to EU fiscal, environmental and social standards.

Further seminars are planned on the governance of any agreement to allow dispute resolution, the arrangements in haulage and aviation, security, foreign policy, space, energy, mobility of citizens travelling between the UK and the EU, and future British involvement in the EU’s programmes, including in higher education. – Guardian/Agencies