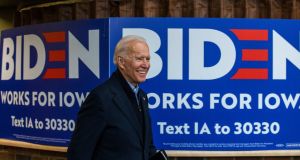 As Washington braces itself for the impeachment trial of president Donald Trump, another kind of drama is set to dominate US political life in the coming weeks and months.

Democrats will choose their candidate to take on Trump in November’s presidential election through a series of caucuses and primaries in the first half of this year. The successful candidate will then be announced at the Democratic National Convention in Milwaukee in July.

The first key date is February 3rd, when Iowa holds its caucus. Unlike the regular primary process in which registered Democrats cast their ballot at a polling booth, in Iowa voters will gather at hundreds of locations across the state where they publicly select candidates.

New Hampshire holds its primary a week later, followed in quick succession by Nevada and South Carolina. “Super Tuesday”, on March 3rd, will see more than a dozen states choose their candidate.

With just a month to go until the Iowa caucus, a record number of candidates remain in the race, despite several high-profile contenders such as Kamala Harris and former Texan congressman Beto O’Rourke dropping out in recent months.

While more than a dozen candidates remain in the race, a clutch of top-tier contenders has broken away from the pack. Polling suggests that four candidates have emerged as frontrunners – former vice-president Joe Biden, senators Bernie Sanders and Elizabeth Warren, and Indiana mayor Pete Buttigieg.

According to the latest Morning Consult poll of Democratic voters, Biden leads with 32 per cent, followed by Bernie Sanders on 21 per cent, Warren on 14 per cent and Buttigieg on 8 per cent.

Former New York mayor Mike Bloomberg, who entered the race last month, is a close fifth with 6 per cent. In the early-voting states the picture is very different, however. In Iowa and New Hampshire, Biden is underperforming. The latest average of polls in Iowa put Buttigieg at 21 per cent, followed by Sanders and Biden on 19 per cent and Warren on 15 per cent, with Amy Klobuchar of neighbouring Minnesota on 6 per cent.

A dearth of polls in Iowa in recent weeks, however, has made it difficult to predict with any certainty how the state might caucus on February 3rd. What polling there has been suggests a very tight race, with no stand-out frontrunner.

Despite this, there have been some notable recent trends. The last month has seen Bernie Sanders, who took a break from the campaign trail in October following a heart attack, rebound – a reminder that the support base surrounding the socialist Vermont senator cannot be underestimated despite his ultimately unsuccessful race against Hillary Clinton for the presidential nomination in 2016.

He raised a record $34.5 million (€30.9 million) in the fourth quarter of 2019, the highest figure of any of the candidates who have declared their latest fundraising totals. Most of this was from small online donations, an indication of his strong grassroots support.

Elizabeth Warren, who flourished during the summer, has also witnessed her polling drop, perhaps reflecting wariness about her “Medicare for All” policy, which would provide government-funded healthcare to all Americans.

Warren’s rise was accompanied by Buttigieg’s rapid ascent. The strong performance of the 37-year-old, Oxford- and Harvard-educated military veteran, who would be the first openly gay president if elected, was the surprise development of the primary campaign in 2019, though many doubt he has the experience to hold the highest office in the land.

The 77-year-old Biden’s persistent status at the top of national polls has emerged as one of the most important constants of the campaign since he entered the race last April.

Despite several gaffes and questions about his age – he was first elected to the US Senate in 1972, 10 years before Buttigieg was born – Biden has retained his frontrunner status in national polls.

His performance in the most recent candidates’ debate, in December, was his best so far, as he managed to stay largely above the fray. He still, however, could face renewed scrutiny over his son Hunter’s appointment to the board of a Ukrainian gas company while he was vice-president – a subplot in the impeachment drama that will play out in Washington in the coming months.

Over the Christmas break he equivocated about whether he would comply with any subpoena to appear at the impeachment trial, though ultimately he said he would, while insisting there was no “legal basis” for requesting him to testify.

All of the main candidates have spent the Christmas break campaigning in the early-voting states, particularly Iowa. Together with New Hampshire, the Hawk-Eye State has played an outsized role in the presidential primary contests, despite the fact that neither state reflects the racial diversity of America.

Biden’s campaign team is bracing for the possibility that he could finish third or fourth in the Iowa caucus and New Hampshire primary. But they are confident that he will outperform in the more racially-diverse states that vote shortly after, such as Nevada and South Carolina, where Biden has unrivalled support among the black community.

Speculation is also mounting about who the prospective candidates may choose as their running mate – one possibility being discussed in circles in Washington is a Biden-Kamala Harris ticket, despite the fact that the two clashed over Biden’s record on race in the first Democratic debate in June.

With the Iowa caucus now a month away, the impeachment of the current president may also complicate the selection process. Four of the Democratic candidates are US senators and will be required to remain in Washington for the impeachment trial if it commences, as expected, this month.

The development may be an unexpected boon for candidates such as Biden and Buttigieg, who will be free to continue campaigning in the all-important midwestern state.

With a stand-out candidate yet to emerge from the campaign, it is still all to play for as Democrats decide who will best represent their party and take on Donald Trump in November’s election.

Countdown to 2020 – the Democratic nomination process