Trump accuses Pelosi of ‘breaking all rules’ on impeachment process 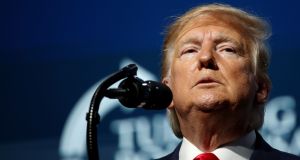 Donald Trump: “Pelosi gives us the most unfair trial in the history of the US Congress, and now she is crying for fairness in the Senate, and breaking all rules while doing so.”

US president Donald Trump accused Nancy Pelosi of “breaking all rules” on impeachment, as he railed against the House Speaker’s decision to delay sending articles of impeachment to the Senate.

“Pelosi gives us the most unfair trial in the history of the US Congress, and now she is crying for fairness in the Senate, and breaking all rules while doing so,” the president tweeted from his home in Florida. “She lost Congress once, she will do it again!

Mr Trump became the third president in US history to be impeached when the Democratically-controlled House charged him with two articles of impeachment over his dealings with Ukraine.

Under the constitution, the process will move to the Senate for a trial, where the 100-member upper house will decide whether or not to convict the president of wrongdoing.

Ms Pelosi defended her actions on twitter on Monday.

“The House cannot choose our impeachment managers until we know what sort of trial the Senate will conduct,” she wrote. “President Trump blocked his own witnesses and documents from the House, and from the American people, on phony complaints about the House process. What is his excuse now?”

Democrats are demanding the Senate trial calls witnesses, including senior White House officials who were named during the three-month inquiry into Mr Trump’s dealings with Ukraine such as acting chief of staff Mick Mulvaney and former national security advisor John Bolton.

On Monday, Senate minority leader Chuck Schumer issued fresh demands, calling for emails and other documents from the White House to be released.

“There simply is no good reason why evidence that is directly relevant to the conduct at issue in the articles of impeachment should be withheld from the Senate and the American people,” he wrote in a letter.

For his part, Mitch McConnell, the top Senate Republican, criticised Democrats for delaying the next stage in the impeachment process and accused Ms Pelosi of taking an “absurd position”.

“[Pelosi] apparently believes that she can tell us how to run the trial,” he said in an interview on Monday. “We’re at an impasse. We can’t do anything until the Speaker sends the papers over, so everybody enjoy the holidays,” he said.

He also disputed whether Democrats would be impartial in the forthcoming Senate trial.

“Do you think Chuck Schumer is impartial? Do you think Elizabeth Warren is impartial? Bernie Sanders is impartial? So let’s quit the charade. This is a political exercise . . . All I’m asking of Schumer is that we treat Trump the same way we treated [president] Clinton,” he said, referring to the most recent US impeachment trial, that of president Bill Clinton which took place in early 1999.

Nonetheless, he did not rule out calling witnesses, a key demand of Democrats.

As Washington prepared for a Senate trial earlier next year, in a New York Times opinion piece, Democratic senator Pat Leahy criticised some of his Republican colleagues in the Senate for suggesting that they would not be impartial jurors. Noting that senators “serve as a unique combination of judge and juror during an impeachment trial,” Mr Leahy said that all 100 senators will have to swear a special oath to uphold “impartial justice”.

“The House has accumulated significant evidence that Mr Trump used his office, and leveraged congressionally appropriated foreign security assistance, for his personal political benefit by attempting to coerce Ukraine, a foreign ally facing Russian aggression, to announce an investigation into a domestic political rival,” he wrote.