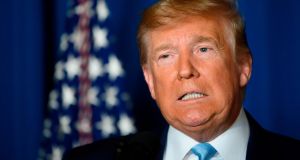 US president Donald Trump warned the US is targeting 52 sites in Iran and will hit them ‘very fast and very hard’. Photograph: Jim Watson/AFP via Getty

US president Donald Trump has warned Iran that the US could strike 52 Iranian sites if provoked, in a significant escalation of rhetoric following the killing of General Qassem Suleimani by a US military drone on Friday.

Tweeting from his residence in Mar-a-Lago, Florida on Saturday, Mr Trump wrote: “Let this serve as a WARNING that if Iran strikes any Americans, or American assets, we have targeted 52 Iranian sites (representing the 52 American hostages taken by Iran many years ago), some at a very high level & important to Iran & the Iranian culture, and those targets, and Iran itself, WILL BE HIT VERY FAST AND VERY HARD,” he said. “The USA wants no more threats.”

His comments – which refer to the 52 US citizens who were taken hostage in the US embassy in Tehran in 1979 – come after tens of thousands of people marched in Iraq on Saturday to mourn Iranian military commander Suleimani and Iraqi militia leader Abu Mahdi al-Muhandis. Both were killed in a US drone strike on a convoy leaving Baghdad International Airport.

The incident has prompted fears that the US and Iran could be veering towards military confrontation in the Middle East. Tehran has vowed to avenge the killing of Suleimani — the head of the Iranian Revolutionary Guards’ elite Quds force and one of the state’s most significant military commanders.

Iran condemned Donald Trump as a “terrorist in a suit” after the US president threatened to hit 52 Iranian sites if Tehran attacks Americans or US assets in retaliation for the killing of Qassem Soleimani.

“Like ISIS, Like Hitler, Like Genghis! They all hate cultures. Trump is a terrorist in a suit. He will learn history very soon that NOBODY can defeat ‘the Great Iranian Nation & Culture’,” Information and Telecommunications Minister Mohammad Javad Azari-Jahromi tweeted.

Iran’s army chief, Major General Abdolrahim Mousavi, was quoted by state television on Sunday as saying the United States lacked the courage for military confrontation with Iran. “In a potential conflict in the future, which I don’t think they (Americans) have the courage to carry out, there it will become clear where the numbers five and two will belong,” he said.

British foreign minister Dominic Raab said on Sunday he understood why the United States had killed a top Iranian military commander but urged a de-escalation of tensions in the Middle East to avoid war in the region.

Mr Raab, who is due to meet US Secretary of State Mike Pompeo in Washington on Thursday, said he had spoken to Iraq’s prime minister and president and also planned to speak to Iran’s foreign minister later on Sunday.

Mr Raab said Soleimani was a “regional menace” and he understood “the position the Americans found themselves in”. Asked if the killing was legal, he said: “It was General Soleimani’s job description to engage proxies and militias ... to attack Western countries that were legitimately there and in those circumstances the right of self defence clearly applies.”

Mr Raab said Britain, which on Saturday warned its citizens against travel to Iraq and Iran, was taking “every essential measure” to reduce the risk to British nationals, diplomatic missions and military personnel. He said the leadership in Tehran needed to know that there was a diplomatic way out. “There is a route through which allows Iran to come in from out of the international cold,” he told Sky News. “We need to contain the nefarious actions of Iran but we also need to deescalate and stabilise the situation.”

....targeted 52 Iranian sites (representing the 52 American hostages taken by Iran many years ago), some at a very high level & important to Iran & the Iranian culture, and those targets, and Iran itself, WILL BE HIT VERY FAST AND VERY HARD. The USA wants no more threats!

Iran but we also need to deescalate and stabilise the situation.” Opposition Labour lawmaker Keir Starmer, the bookmakers’ favourite to win the party’s upcoming leadership contest, said the killing of Soleiman was the “unilateral act of an irrational and erratic president”. “We cannot blindly follow the Americans into what could well turn out to be a war in the Middle East,” he told the BBC.

European Union’s foreign policy chief Josep Borrell also urged a de-escalation of tensions in the Middle East in a talk with Iran’s Foreign Affairs Minister Javad Zarif over the weekend, an EU statement said on Sunday.

Days after the killing of Iranian military commander by the US in Iraq, Mr Borrell called on Iran to “carefully consider any reaction” and invited Mr Zarif to Brussels to discuss the situation in the Middle East and the preservation of a nuclear deal with Tehran.

Mr Trump, who is due to return to Washington from Mar-a-Lago where he spent the Christmas holidays later on Sunday, ordered the drone strike last week, but has claimed that he took the action “to stop a war.”

“We did not take action to start a war,” he said in a hastily-convened press conference at Mar-a-Lago on Friday.

He also warned, however, that he was ready and prepared to take “whatever action is necessary” if American interests are threatened.

US Secretary of State Mike Pompeo, who has briefed US allies about the strike in recent days, criticised European countries for not supporting the American decision.

“The Europeans haven’t been as helpful as I wish that they could be,” he said in an interview with Fox News. “The Brits, the French, the Germans all need to understand that what we did — what the Americans did – saved lives in Europe as well.”

Relations between the US and its European allies had already been strained over Iran policy following the US decision to withdraw from the 2015 Iran nuclear deal.

The latest comments from the Trump administration come as rockets were fired in Baghdad on Saturday, including in the Green zone near the US embassy. No casualties were reported.

Friday’s air strike which killed one of Iran’s best known figures, was the culmination of days of heightened tension between the US and Iran following an attack on a US compound in Iraq on December 27th which left one American contractor dead. The US blamed an Iranian-backed militia group, Kataib Hezbollah, for the attack, and subsequently launched strikes on sites associated with the groups, which killed more than two dozen people. Following those strikes, the US embassy in Baghdad was stormed by protestors believed to be associated with the Iranian-backed group.

General Qassem Suleimani was one of the most powerful figures in Iran and was centrally involved in Iran’s activities in the greater Middle East region, where it supports various militia groups.

Mr Pompeo has announced the deployment of thousands of extra US troops to the region - many of whom are expected to pass through Shannon airport in Ireland - in response to the growing crisis.

As the funeral procession for Suleimani took place in Iraq, thousands of protestors took to the streets in Iran to protest, some burning US, British and Israeli flags, and chanting “death to America.”

A veteran of the Iran-Iraq war, Suleimani was a towering figure in Iran and the mastermind of the state’s regional policy which saw it build militia alliances throughout the Middle East. Abu Mahdi al-Muhandis, the commander of the Iranian-backed Kataib Hezbollah in Iraq, was also killed in the targeted attacks.

Iraq’s parliament was set to convene an extraordinary session on Sunday where lawmakers told Reuters they would push for a vote on a resolution requiring the government to request the withdrawal of US troops from Iraq. “There is no need for the presence of American forces after defeating Daesh (Islamic State),” said Ammar al-Shibli, a Shi’ite lawmaker and member of parliament’s legal committee.

Despite decades of enmity between Iran and the United States, Iran-backed militia and US troops fought side by side during Iraq’s 2014-2017 war against Islamic State militants. Around 5,000 US troops remain in Iraq, most of them in an advisory capacity. The militia were incorporated into government forces under the umbrella of the Popular Mobilisation Forces which Muhandis led.

Many Iraqis, including opponents of Soleimani, have expressed anger at Washington for killing the two men on Iraqi soil and possibly dragging their country into another conflict.