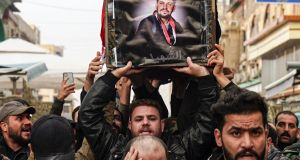 Iraqi mourners carry the coffin of a protester and citizen journalist killed at demonstrations in Baghdad. Photograph: Haidar Hamdani/AFP

Tensions have flared in Iraq after unidentified gunmen slew 25 demonstrators and wounded 130 in Baghdad and a mysterious drone bombed the home in the city of Najaf of a key Shia clerical supporter of the protests. This attack was the most violent in the capital since early October when protests erupted and 165 were killed by security forces and militia snipers.

On late Friday night, gunmen arriving in lorries and knife-wielding infiltrators mounted a two-pronged attack on demonstrators camping in a parking garage near Tahrir Square, the capital’s protest hub. One witness told Amnesty International, “They came to kill. They opened fire immediately. They targeted people by shooting straight at them, not in the air. They were not masked, I do not think they cared if anybody saw them.’”

Amnesty’s regional research director Lynn Maalouf stated, “The testimony we have gathered leaves little doubt that this was a co-ordinated attack and raises serious questions as to how heavily armed gunmen in a fleet of vehicles were seemingly able to pass through Baghdad’s checkpoints and inflict a bloody onslaught.”

Maalouf called on the authorities to “urgently investigate these attacks and bring the perpetrators of justice and immediately act to ensure protesters are protected. Failure to do so would send a message that such abuses will be tolerated.”

The well-planned offensive coincided with the strike on the home in the Shia holy city of nationalist cleric Muqtada al-Sadr whose followers have joined and attempted to protect protests. Mounting an attack on Sadr is risky. He is an independent who not only opposed the 2003 US occupation but is also highly critical of Iran’s interference in Iraq’s affairs. Sadr’s political faction is the largest in parliament. He commands an armed militia and has millions of Shia followers in the country, notably in Baghdad’s impoverished Sadr City from where thousands of protesters have come.

At the time of the drone strike, he was reportedly visiting Iran, perhaps to urge Tehran to listen to the protesters rather than urge allies in the government to crack down on them.

After last week’s resignation of prime minister Adel Abdel Mahdi, Maj Gen Qassem Soleimani (commander of Iran’s elite Quds force) and Mohamed Kawtharani (a representative of Lebanon’s Hizbullah movement) consulted with the very Iraqi politicians and militia leaders protesters seek to oust. The co-ordinated attacks in Baghdad and Najaf followed stabbings at Tahrir Square which left 13 wounded and suggest that pro-Iranian elements are determined to wage a war of attrition against Iraqis who seek to topple the sectarian regime.

Since protesters quickly returned to the site of the onslaught, it is clear they are determined to continue their campaign. Many blame Iran for mismanagement, corruption and lack of essential services and jobs since 2003 when the US occupied the country and handed power to pro-Iranian Shia fundamentalist exiles. An estimated $320 billion in Iraqi oil revenues has disappeared through graft instead of being invested in the country’s war-damaged and neglected infrastructure, schools, health facilities and agricultural land.