On the UK canvass: Brexit tensions make for vicious election

Crewe and Nantwich is another knife edge constituency in the UK general election where a Conservative win could see Boris Johnson returning to 10 Downing Street. Video: Enda O'Dowd 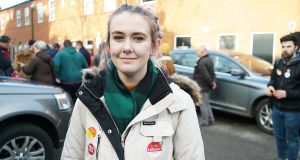 On the canvass: Olivia Malone, a student from Wexford studying politics in Manchester, believes this election is more divisive than Irish abortion referendum. Photograph: Enda O’Dowd

Tensions over Brexit and the unpopularity of party leaders Boris Johnson and Jeremy Corbyn have made this UK general election one of the most vicious in living memory.

Wexford student Olivia Malone, a canvasser for Labour MP Laura Smith who is defending a wafer-thin majority of 48 on her surprise 2017 win in the Cheshire constituency of Crewe and Nantwich, says this election is stirring stronger tensions than last year’s Eighth Amendment campaign that legalised abortion in Ireland.

“The nastiness of it, it is very emotional. Even when I was campaigning for repeal [in Ireland], that was less emotional than this election,” said the 19-year-old politics and German student at the University of Manchester.

Malone, a member of Labour’s youth wing, has canvassed for the party’s candidates across the northwest of England.

“I got a man who shouted at me for supporting Jeremy Corbyn saying he is a terrible leader and a terrorist supporter and all this mad stuff,” said the Irish teenager who is concerned about assaults on canvassers.

Labour banned solo canvassing after a female volunteer in her 70s was assaulted in the Herefordshire town of Bromyard last week.

One elderly man outside St Mary’s church in the centre of the market town of Nantwich told The Irish Times that this was “the most evil election in our country that I have known in my lifetime”. He declined to say how he would vote.

Standing at the back of Labour’s campaign office in Crewe, Malone was among about 75 people gathered to hear a pep talk from Smith on Saturday before heading out to canvass in the railway town.

Labour councillor from Warrington Amanda King gave campaign workers advice on what to do if they encountered angry people on the doorsteps who might say, “Oh no, not Brexit. Oh no, not Jeremy”.

“Kill them with kindness is my view. Always be kind with someone on the doorstep. There has been a couple of altercations on the doorstep so do everything in pairs,” King told them.

In Crewe and Nantwich, a top Conservative target for its candidate Dr Kieran Mullan, Smith is facing strong opposition over Corbyn as leader and the party’s stance to put a new Brexit deal to the people.

“It is on a knife-edge,” said the constituency Labour Party chairman Connor Naismith.

He acknowledged that the party’s position was not popular with leave voters and that Corbyn was not liked by some Labour voters. He says some of them did not like Tony Blair or Gordon Brown either.

On Brexit, he said Smith was showing a “kind of pragmatism”.

“We all recognise this is a divided country. The referendum split families in half, it split personal relationships in half and Laura has done her best to try and represent both sides of that argument,” he said.

Concerns about the reception campaign volunteers receive on the doorsteps has spread to Ireland.

“My mother told me on the phone the other day, ‘I would be worried about you going out there now’,” said Malone.

“It is quite an election.”