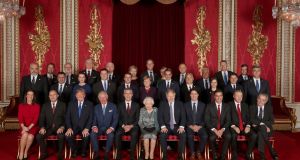 Leaders of NATO alliance countries, and its secretary general, join Britain’s Queen Elizabeth and the prince of Wales for a group picture during a reception at Buckingham Palace in London. Photograph: Yui Mok/Pool via The New York Times

It was like a giant game of hide and seek at Buckingham Palace last night as Boris Johnson avoided Donald Trump and palace flunkeys contrived to keep Jeremy Corbyn away from the US president. The prime minister was so anxious to avoid being seen with Trump that he left him and his wife Melania shivering on the steps of Downing Street rather than go out to meet them.

Corbyn had planned to confront the president at the palace about his intentions in any future trade deal, seeking assurances that nothing would affect Britain’s public services. But the Labour leader, who is fastidiously polite in private, will keep up the attack in public so that the threat to the National Health Service (NHS) remains at the top of the agenda.

As I report here Trump said he had no interest in the NHS and would not take it if it was offered on “a silver platter”. But he was not asked directly about whether he would demand that US pharmaceutical companies should be able to charge more for drugs sold to the health service.

Trump remained on-message where the British election is concerned, telling reporters he wanted to stay out of it before adding that he was sure Johnson would do a great job. Johnson and Trump will hold separate press conferences today at the end of Nato’s 70th anniversary summit, which is being held at a hotel in Watford.

The US president’s mood may not be improved by the release overnight of video appearing to show Johnson with Emmanuel Macron and Justin Trudeau gossiping about the president’s 40-minute, impromptu press conference earlier in the day.

The Nato summit has had a muffling effect on the election campaign as the Conservatives hold their breath waiting for Trump to leave without causing any trouble. The polls continue to show the Conservatives comfortably ahead, with Labour gaining ground while the Liberal Democrats and the Brexit Party are squeezed.

The Tories remain confident despite the polls’ recent tightening, partly because they believe their vote is holding up better than expected in Scotland and the south-east of England, where they were braced for heavy losses at the start of the campaign. A new YouGov poll points to a net gain of one seat for the Conservatives in London, despite a recovery for Labour in the capital.

The Evening Standard reports that the Conservatives are hiding Johnson from London voters in Facebook ads, while the prime minister is front and centre in ads directed at voters in the Midlands and the north of England.

Gerry Moriarty says Sylvia Hermon will be a hard act to follow in South Down.

The Irish Times view on the election in Northern Ireland.

Sebastian Payne in the FT on shifting allegiances in Surrey’s Tory heartlands.

Paul Mason in the i paper on the threat to Labour in the north of England.

“We did have a sense of good guys on both sides who knew how far to go, knew there were some lines that they shouldn’t cross, and I think we’ve lost that for the time being, and I think it’s really sad” - former Conservative chairman and EU commissioner Chris Patten on Britain’s political culture.

Boris Johnson hosts Nato leaders at a summit in Watford