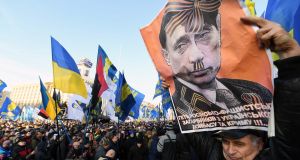 An activist holds a poster depicting Russian president Vladimir Putin as people gather for a mass rally to demand “no capitulation” to Russia, at the Independence Square in Kiev. Photograph: Sergei Supinsky/AFP

Ukrainian president Volodymyr Zelenskiy has said he seeks a “concrete result” from his first meeting with Russian counterpart Vladimir Putin on Monday, but played down hopes for a swift end to the five-year war between their countries.

They will hold talks at the Élysée Palace in Paris with French president Emmanuel Macron and German chancellor Angela Merkel, to relaunch a stalled peace process and so-called Normandy format talks that last took place in October 2016.

The inexperienced Mr Zelenskiy – who swapped a career in comedy for politics this year – heads to France under domestic pressure not to make major concessions to Moscow and its proxy militia in eastern Ukraine, where fighting since spring 2014 has killed more than 13,000 people and displaced 1.6 million.

He is also aware that Paris and Berlin would like to start repairing political and economic ties with Russia, and that US backing cannot be taken for granted after President Donald Trump allegedly linked aid for Kiev to political favours.

Thousands of Ukrainians joined a “no capitulation” rally in Kiev on Sunday to demand that Mr Zelenskiy take a strong line with Mr Putin, who seized Crimea and fomented war in the Donbas region after Ukraine’s 2014 pro-western revolution.

Mr Zelenskiy has repeatedly stated that he seeks peace but not at any cost, and that militants must disarm, Russian forces withdraw and Ukraine regain full control of its eastern border before local elections are held in Donbas.

Moscow and the separatists, however, say that this sequencing runs counter to the 2015 Minsk agreement signed by Mr Zelenskiy’s predecessor, Petro Poroshenko.

They also object to Mr Zelenskiy’s refusal to talk directly to separatist leaders, to offer an amnesty to all militants or to write autonomy for Donbas into Ukraine’s constitution, which Kiev fears would give the Kremlin de facto control over a swathe of the country.

“I want to come back [from Paris] with concrete things and a concrete result. But we understand that we won’t manage everything. A meeting is already a victory . . . I hope to find a chance to talk about peace,” Mr Zelenskiy said on Ukrainian television on Friday night.

“What could I be afraid of? I’m the president of a free country. I’m a decent person. I will not sell my country to anyone, ever, for anything.”

Mr Zelenskiy (41) said he hoped Mr Putin would agree to a major prisoner swap between Russia and Ukraine before the end of the year and to a timetable for establishing a full ceasefire in Donbas.

“I’ve spoken with the Russian president . . . but that was a telephone conversation,” he said. “I want to see this person and bring back from the Normandy [talks] an understanding and a sense that everyone, step-by-step, really wants to end this tragic war. I can really find that out at the table.”

The Kremlin still denies being involved in the conflict, however, and objects to any deviation from the Minsk deal, which Mr Poroshenko signed under huge pressure as Russian and militant forces were routing Ukraine’s troops in early 2015.

France and Germany have urged Moscow to take steps to end the war, but in recent weeks Mr Macron has called for renewed European engagement with Russia and insisted that it is not an enemy of the West.

German business groups are also pushing for a “reset” with Moscow, but Berlin expelled two Russian diplomats last week amid tension over the suspected role of Russian intelligence in the murder of a Georgian man in the city in August.

Energy is also on Monday’s agenda, as the current deal for Russian gas supplies to Ukraine and onward transit to EU states is set to expire at the end of this month.