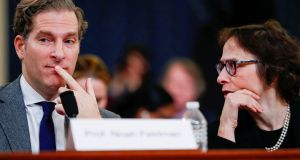 Noah Feldman of Harvard Law School and Pamela Karlan of Stanford Law School during a House judiciary committee hearing on the impeachment inquiry into Donald Trump in Washington on Wednesday. Photograph: Tom Brenner/Reuters

Addressing members of the committee, which is the congressional body responsible for drafting articles of impeachment, four leading law professors proferred their views on the historical background to impeachment, as the committee weighs whether to recommend that Mr Trump be impeached over his dealings with Ukraine.

At the heart of the inquiry is a July 25th phone call between Mr Trump and Ukrainian president Volodymyr Zelenskiy during which the US president asked his counterpart for a “favour”, which was to investigate former vice-president Joe Biden.

In a sometimes rancorous hearing which saw Republican members of the committee seek to interrupt the proceedings, members heard that Mr Trump had committed impeachable offences, and in particular was guilty of “high crimes and misdemeanours” outlined in the US constitution.

“President Trump has committed impeachable high crimes and misdemeanors by corruptly abusing the office of the presidency,” Harvard law professor Noah Feldman told the committee. In particular, he said that the July 25th phone call between Mr Trump and Mr Zelenskiy “more than sufficiently indicates that President Trump abused his office by soliciting the president of Ukraine to investigate his political rivals”.

Mr Trump’s activities proved, he said, that Mr Trump “would take any means whatever to ensure his re-election – that is the reason why the framers allowed for impeachment”, noting that the authors of the US constitution felt it was essential to include a clause on impeachment in America’s founding document in order to ensure sufficient checks on the president.

Under questioning by counsel for Democrats on the committee, Mr Feldman said: “If we can’t impeach a president who abuses his office for personal advantage, we no longer live in a democracy. We live in a monarchy, or we live in a dictatorship.”

Pamela Karlan, a law professor at Stanford University, gave an impassioned opening address in which she took issue with a suggestion by ranking Republican Doug Collins that witnesses may have not read the transcripts of the previous hearings.

“Mr Collins, I would like to say to you, sir, that I read transcripts of every one of the witnesses who appeared in the live hearings,” she said, referring to last month’s House intelligence committee public hearings. “I’m insulted by the suggestion that as a law professor I don’t care about those facts,” she said.

Michael Gerhardt of the University of North Carolina said that Mr Trump was guilty of bribery as well as high crimes and misdemeanours – all of which are mentioned in the constitution. He said that ultimately the decision on whether these activities constituted impeachable behaviour was a question of context.

However, he said that, on reviewing the evidence, his conclusion was that “this president has attacked each of the constitution’s safeguards against establishing a monarchy in this country”.

Jonathan Turley, a law professor at George Washington University, gave a different view. Selected by Republicans to attend the hearing – the other three witnesses were selected by Democrats – he said that Mr Trump’s activities did not meet the standard of impeachment.

“This is wrong,” he said. While Mr Trump’s call with Mr Zelenskiy was “anything but perfect”, he said: “This is not how we impeach an American president.”

Wednesday’s hearings mark a new phase in the impeachment inquiry. On the eve of the hearings the House intelligence committee, which undertook weeks of private and public testimony, endorsed a 300-page report on its findings, which has now been passed to the judiciary committee for consideration.

Committee chairman Jerry Nadler referenced the Mueller report into Russian electoral interference in his opening statement, prompting speculation that the Russia investigation may form part of any impeachment charges.