UK election: ‘Has the beast of Bolsover lost his teeth?’

The former miner community of Bolsover is an unlikely target for the Conservatives in the UK general election but years of austerity cuts have fractured the vote and split old loyalties. Video: Enda O'Dowd 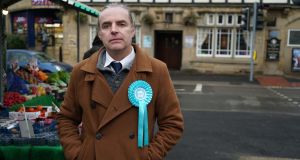 Kevin Harper, whose father emigrated from Kilkeel, Co Down, is the Brexit party’s candidate for the Bolsover area. Photograph: Enda O’Dowd

Bridget Mouncey declares herself a “Dennis Skinner fan” and plans to vote for the veteran Labour MP in Bolsover, the old Derbyshire mining town in the north of England.

Her daughter Tammy White, juggling busy eight-month-old Amber on her lap, is not so sure about voting for the last parliament’s second-longest serving MP in Thursday’s UK general election.

“Are we ready for somebody new to come in and get things moving?” she says of a man first elected in 1970.

Carrie-Anne Hollinshead, at their table during a Bolsover charity coffee morning, is struggling with something dominating this election campaign: trust.

She is undecided. She does not believe Labour leader Jeremy Corbyn and his promise-heavy manifesto of big-ticket spending items to help the less well-off.

Like many in this market town, Hollinshead recognises that Bolsover is more than just a constituency fight. This is a battleground for the nation as the Tories look to take a Labour stronghold in a heavy leave-voting constituency (71 per cent) with their promise to “get Brexit done” amid Labour’s prevarication on the issue.

Boris Johnson and the Tories see Bolsover as a constituency that can help return them to power with a majority so they can push through Johnson’s Brexit deal with the EU and get the UK out by January 31st.

“I don’t feel we are voting for the constituency, but for the parliament. I don’t think I could vote for Corbyn but I don’t know who I could vote for. I don’t trust the Conservatives either. It is a bit tricky,” said Hollinshead.

The three women, all traditional Labour voters, are sipping tea in Bolsover’s Hilltown Methodist Church at a “free cafe”organised by the Freedom Community Project, a charity established to help the poorest in the region manage their lost benefits, advise on mounting loans and feed the hungry.

White is a social worker and says the last nine years of social welfare cuts by the Tories have been “very difficult” for an area ravaged like Bolsover.

“It is sad really that you have got to have places like this and they are getting busier and busier. We notice more and more food parcels going out,” she said.

Mark North, chief executive of Freedom, says Bolsover’s poor are not just coming in hungry these days but have no money for gas or electricity to cook the free food they receive. He is seeing increasing numbers of working people who are homeless and a level of poverty here “that is Dickensian really.”

This is driving political apathy and a sense of powerlessness and isolation among the people that fed Bolsover’s big Brexit vote, he says.

It is leading to a growing trend of people who feel left behind by the main parties and are voting for Independents. Labour lost control of the local district council in May’s local elections for the first time since its inception.

“There is a lot of blame against politicians full stop, no matter what political party,” said North.

Ross Walker, a former Labour man elected an independent councillor in May, says Skinner, a former miner, “has been in parliament longer than I have been alive.”

Speaking against the backdrop of Bolsover’s supposedly haunted castle, he feels Bolsover needs to break from the past.

“Labour have totally ignored people around here. Independents are free from those party politics, from all that baggage,” said Walker who is one of six candidates standing against Skinner in the election.

It says something about Labour’s standing in Bolsover during this unusual election that after a near-decade of austerity under Conservative governments - in a former mining area with a deeply ingrained, intergenerational animosity towards Tories – that the party could find themselves in trouble here.

Over in nearby Shirebrook, a town that once employed 2,200 miners, Alan Gascoyne, a former trade union official working for Shirebrook Miners Welfare, says he would “rather chop my hand off than vote Tory.”

He is stunned that former miners are contemplating voting Conservative in order to get Brexit done and to keep Corbyn out.

“They say, ‘we might vote Tory this time but if they get a new leader, then we will come back to Labour when they put Brexit to one side,” said Gascoyne.

“It is odd,” he adds, diplomatically.

Some locals complain that they have rarely seen the 87-year-old Skinner in this campaign or before. The Labour man, known as “the beast of Bolsover,” had a hip replacement recently and is under doctor’s orders to limit his activity.

Other constituents see Skinner’s problems lying solely with Corbyn. The Labour leader is proving so toxic among Labour supporters in Bolsover that he could lead to one of the party’s stalwarts losing of his job of almost 50 years.

“I voted Labour all my life. I wouldn’t vote for Corbyn if you paid me. I don’t like the guy. There is something about him,” said Don Harley, standing in Bolsover’s public market with his Irish Glen of Imaal Terriers Cody and Libby.

“I think he would do this country down if he got into No 10. He cannot make his mind up: we will leave, we will stay,” said his wife Val.

The couple, who both voted leave in the 2016 referendum, will be voting for the Brexit Party on Thursday.

That party’s candidate Kevin Harper says Skinner has not helped his case by blocking a “clean-break Brexit” by voting against successive deals.

Anne Western, a volunteer at his campaign office, defends Skinner’s stance on Brexit against charges that he has failed to deliver on the people’s will.

Skinner, a life-long Eurosceptic, wants out of the EU but “on terms that don’t damage people’s lives,” she says.

“We think it is going to be tight, but it is certainly not lost,” she says of the election.

This kind of defensive talk would have been unthinkable 22 years ago when Skinner won by a majority of 27,149 votes. That narrowed to 5,288 in the 2017 general election. Both long-time and one-time Labour supporters believe it could disappear completely this week.

“The beast has lost his teeth,” said his rival Walker.