Fears of Israeli army offensive in Gaza after violence flares 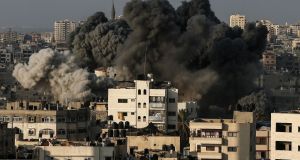 The most serious flare-up since the 2014 Gaza war has left Israel and Hamas on the verge of another major military conflagration.

As the Israeli security cabinet convened on Thursday evening, a high-ranking military official said that Israel was close to launching a large-scale military offensive in the Gaza Strip, adding that there was no end in sight to the current round of violence.

He said that the army would move additional troops to the south and would evacuate civilian communities close to the Gaza border if that proved to be necessary.

At least three Palestinians were killed in more than 150 Israeli air strikes which began after a wave of rockets landed in Israel on Wednesday night. The dead included a pregnant woman and her 18-month-old baby as well as a Hamas fighter.

More than 200 projectiles were launched at Israel, forcing residents to stay close to bomb shelters or secure rooms. Some 30 Israelis were hurt, most lightly, as well as a Thai worker, who sustained serious injuries when a mortar shell hit a packaging factory.

Projectiles were also aimed at Beer Sheba, the largest city in southern Israel, and the coastal town of Ashkelon.

The recent round of violence was sparked by the killing of two Hamas fighters on Tuesday in northern Gaza when Israel shelled a Hamas observation tower.

Hamas described the attack as unprovoked. Israel claimed the two men had fired in the direction of Israel.

There have been several short outbreaks of violence since Hamas initiated March of the Return protests along the border in the spring. 160 Palestinians have been killed in the last four months. The latest flare-up came as the United Nations and Egypt were trying to broker a long-term ceasefire between the two sides.

“Our collective efforts have prevented the situation from exploding until now. If the current escalation, however, is not contained immediately, the situation can rapidly deteriorate with devastating consequences for all people,” he warned.

“The timing of the escalation in the Gaza Strip and the attack on the Palestinian resistance when the Hamas delegation arrived in Cairo for talks, proves that Israel wants to thwart the efforts of Egypt and the UN to achieve a long- term calm.

Israeli defence minister Avigdor Lieberman spoke with the leaders of rocket-battered southern communities on Thursday and told them the military would do whatever it takes to end missile attacks from the Gaza Strip.

Yuval Steinitz, a member of prime minister Binyamin Netanyahu’s security cabinet, said Israel was “not eager to enter a war” but would make no concessions to Hamas.