May meets Macron to seek support for Brexit blueprint 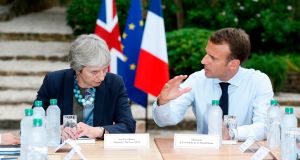 Theresa May has met Emmanuel Macron for talks on Brexit as the clock ticks down for a breakthrough in the process.

The British prime minister visited the French president’s summer retreat in the south of France, breaking in to her own holiday in order to try to find support for her Brexit blueprint.

She has been rallying support both at home and abroad for her “soft Brexit” plan agreed by her cabinet at a meeting at Chequers last month.

Her visit to Mr Macron the Fort de Bregancon followed fresh warnings about the economic impact of the failure to reach a deal on the UK’s departure from the European Union.

Bank of England governor Mark Carney warned that the possibility of a no-deal Brexit was “uncomfortably high” and would lead to higher prices. He said both the UK and EU should “do all things to avoid” a no-deal scenario.

He added that the banks had done the “stockpiling” and the UK’s financial system was in a position to be able to “withstand a shock” which could result from the it leaving the EU without an agreement.

Mr Carney told BBC Radio 4’s Today programme: “I think the possibility of a no deal is uncomfortably high at this point.” Asked if no deal would be a disaster, he said: “It is highly undesirable. Parties should do all things to avoid it.”

Pushed on what no deal would mean for people, Mr Carney said “disruption to trade as we know it” before adding: “As a consequence of that, a disruption to the level of economic activity, higher prices for a period of time.

“Our job at the Bank of England is to make sure those issues don’t happen in the financial system so that people will have things to worry about in a no-deal Brexit, which is still a relatively unlikely possibility but it is a possibility, but what we don’t want to have is people worrying about their money in the bank, whether or not they can get a loan from the bank – whether for a mortgage or for a business idea – and we have put the banks through the wringer well in advance of this to make sure they have the capital.”

The Conservative Party’s Jacob Rees-Mogg, leader of the pro-Brexit European Research Group of MPs, dismissed Mr Carney’s comments. “Mark Carney has long been the high priest of project fear whose reputation for inaccurate and politically motivated forecasting has damaged the reputation of the Bank of England,” he said.

Ms May cut short her break in the Italian Lakes a day early to attend the hastily-arranged talks with Mr Macron. After the Brexit discussions, the prime minister and her husband Philip joined Mr Macron and his wife Brigitte for a five-course private dinner at the Mediterranean island hideaway.

Mr Macron’s office said there would be no press conference or statement after the meeting.