Isolationism is the wrong charge to throw at Donald Trump

US Politics: The president still participates in the world – just not in the way his critics want 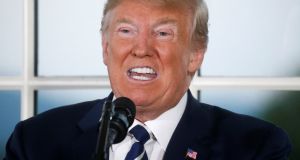 US president Donald Trump owes his grip on eminent Republicans to cravenness on their part and ruthlessness on his. Photograph: Leah Millis/Reuters

Consider some headlines from the serious press over the past year. “Why Americans should fight Donald Trump’s isolationism.” “Trump’s Neo-isolationism won’t work.” “How the GOP embraced the world – and then turned away.” Another, “What Trump calls nationalism looks more like isolationism”, at least argues the case, instead of supposing it as a premise.

This case – that the US is shunning the world – is seconded by a former president. George W Bush flags the “dangers of isolation”. The foreign minister of France worries about “retreat”.

These critics know the history they are slyly evoking. Insularity predates the republic, held up its participation in the second World War and saw in the millennium with the presidential campaigns of Pat Buchanan. American quietists doubt that Providence went to all the trouble of gifting them bounteous land, shielded by oceans from the world’s vicissitudes, only for governments to quest abroad.

If Trump ever belonged in this paleoconservative lineage, he has long since broken from it. Of course, caprice, aggression and technical incompetence mar his foreign policy. He has goaded allies and succoured enemies. He is on his fourth national security adviser. Such is the fragmentation of his team, one of these days a cheeky European will wonder aloud who to call if they wish to speak to America.

Isolationism, however, is a strange slur against a government that is active to a fault. These things evade measurement, but it is unclear whether the American presence in the world, taken in the round, has retracted since the presidency of Barack Obama. The US has flinched from treaties and institutions, no doubt, while throwing itself into other modes of foreign policy.

Cross-reference the headlines about isolation with actual events. This week, Trump restored US sanctions against Iran. His mistrust of the Islamic Republic informs a wider Middle East plan that takes in the cultivation of Saudi Arabia. He is the only US president to have met a North Korean head of state. He has struck Syria with air power to enforce his predecessor’s red line. He has threatened violence against other enemies. He wants a larger military and a “space force” as its sixth branch. He has sent more troops to Afghanistan, against his first instinct.

This is an odd kind of isolation. Nor would his party have worn the real thing. Trump owes his grip on eminent Republicans to cravenness on their part and ruthlessness on his. But there is an unspoken bargain at work, too. The deal is that each ideological faction gets to wet its beak. For religious conservatives: judicial nominees. For business: tax cuts. And for security hawks, such as secretary of state Mike Pompeo: a US that is active in the world.

Even on trade, where a true isolationist would aspire to autarky, Trump never entertains the idea. He sticks to bilateral strong-arming, which throws up the spectacle – so grim to a free trader – of countries “pledging” to buy billions of dollars in American manufactures as if in some geo-economic telethon.

The point is not that these are good foreign policies. The point is that these are foreign policies. When critics press international engagement on Trump, they mean engagement of the kind that they – and I – favour. But it can take other forms. The US still participates in the world: less so than before in some respects (see the bean-counting pettiness about Nato), but more so in others (such as Afghanistan).

The aggregate picture is too mixed to bear the name “isolation”. “Chauvinism” is more like it. Richard Haass of the Council on Foreign Relations suggests “abdication”, but even this implies across-the-board retreat from the baseline that Trump inherited.

Which takes us back to his predecessor. All told, is this president less engaged than the last one? Obama honoured the institutional architecture of the postwar west. He knew friends from enemies in a way that should embarrass Trump. He was never a pacifist.

Still, he brought to foreign policy a kind of reckless caution. He sometimes heeded the costs of action over the costs of passivity. Syria is a gruesome case in point. He was candid about this prudence, too, drawing down in Afghanistan to favour “nation-building at home”. The World As It Is, by his adviser Ben Rhodes, is a tale of high-minded people slowly caving to realism, right down to its clinical, VS Naipaul-ish title.

Thinking back, what was Obama’s dictum “Don’t do stupid stuff” if not quietism in millennial demotic? The US was not so intrepid in its globalism two years ago. It is not such a recluse now. – Copyright The Financial Times Limited 2018