Iran braced for return of punitive US sanctions 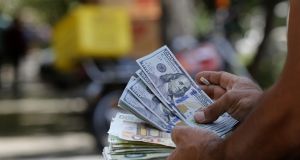 Iranian president Hassan Rouhani accuses the US of waging “psychological warfare” against his country due to economic uncertainty driven by the reimposition of punitive sanctions.

The first victim of US policy has been Iran’s currency, the rial, which has plunged against the US dollar by 80 per cent since last year. This has precipitated panic among the populace and produced double-digit inflation by raising the prices of imported goods and raw materials.

In anticipation of US bans on dollar transactions and the purchase of precious metals, steel, aluminium, commercial aircraft and vehicles, the government has cut imports of non-essential goods, hoarded foreign currencies, stocked up on necessary foreign items, and introduced subsidies on food and medicine.

Five 70-seat passenger aircraft built by an Italian-French consortium landed in Tehran in time to beat the ban on aircraft.

Fearful Iranians have changed rials into gold or foreign currencies with the aim of preserving their savings and hedging against the higher costs of imports and local goods and produce. While medicines are meant to be exempt from sanctions, many Iranians will not be able to afford life-preserving drugs. Some could die, as happened under the earlier sanctions regime.

We Need Your Suggestions Only!!! . Please Read Dr. @afshineemrani ‘s Post (image). If you post any type of of political comment, you will be deleted and be blocked. . . #iransanctions #helpingiranians #medicinetoiran #afshineemrani #humanitarian #help

Domestic automakers relying on imported steel and aluminium will have to curb output and lay off workers. Farmers will be hit by the progressive reduction of foreign currencies used to acquire tools and machinery.

The US ban on the import of Persian carpets will affect two million weavers employed in this sector. Black marketeers will prosper while the rich will carry on with comfortable lives. The poor – 39 per cent of 80 million people – and middle-class Iranians will struggle and continue to protest over mismanagement, corruption, unemployment, soaring living costs and shortages of electricity and water.

US administration hawks believe these protests could spark regime change. And they strongly support the November round of sanctions targeting Iranian oil exports, which account for 80 per cent of its foreign exchange earnings, ratcheting up pressure on the government and populace.

Iran’s oil exports stood at a high 2.7 million barrels a day in May when the US pulled out of the Iranian nuclear deal and announced the “snap back” of sanctions.

However, International Crisis Group Iran expert Ali Vaez predicted reimposed sanctions would have less impact on Iran than previous sanctions regimes, which were upheld by the international community. Iranian foreign minister Mohamed Javad Zarif tweeted: “The world is sick & tired of US unilateralism.”

China, India and Turkey, whichtogether account for 43 per cent of Iran’s oil exports, have said they will continue purchasing Iranian oil at current volumes. Smarting from tariffs on Chinese exports to the US, Beijing could boost Iranian oil imports. Revenues from these exports combined with an expected rise in the oil price could sustain the Iranian economy and ease the situation of the population.

US allies Japan and South Korea, which buy 24 per cent of Iranian exports, have asked for special consideration. The European Union has also vowed to resist sanctions on oil as well as other goods.

EU foreign policy chief Federica Mogherini called on EU members to increase business with Iran with the aim of ensuring it receives economic benefits from sanctions relief while honouring its commitment to shrink its nuclear programme.

By sidestepping the sanctions these countries could also make contributions to the wellbeing of the Iranian people.

Full Dáil sits this week for first time since before election