Manafort accountant says his client did not disclose foreign accounts 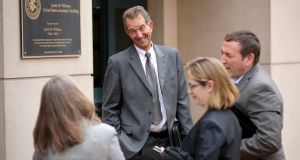 Accountant Philip Ayliff outside the courtroom on Friday where he was giving evidence in the trial of former Trump campaign chairman Paul Manafort. Photograph: Chip Somodevilla/Getty Images

An accountant for Paul Manafort testified on Friday that US president Donald Trump’s former campaign chairman never revealed he controlled overseas bank accounts and corporate entities tied to them, as prosecutors sought to prove fraud charges on the fourth day of the trial.

The testimony by Philip Ayliff, an accountant with the KWC firm, was part of the prosecution’s effort to show that Mr Manafort hid from US tax authorities millions of dollars of income he earned working for pro-Russian politicians in Ukraine and that he violated banking laws.

The trial in federal court in Alexandria, Virginia, is the first arising from special counsel Robert Mueller’s investigation of Russia’s role in the 2016 US election. Mr Manafort (69) has pleaded not guilty to charges of bank fraud, tax fraud and failing to disclose foreign bank accounts.

Asked why it would be important to know if Mr Manafort had a controlling stake or authority over the distribution of funds from such accounts, Mr Ayliff said, “Because they would have to do the FBAR report requirement.”

The US Internal Revenue Service requires anyone with controlling interest in a foreign account worth more than $10,000 (€8,600) at any point in the preceding year to file a Report of Foreign Bank and Financial Accounts (FBAR).

Prosecutors also asked Mr Ayliff about Mr Manafort’s accounting of a $1.5 million transfer in 2012 from Peranova Holdings Ltd as a loan, even as records showed that no interest or principal was paid on it in subsequent years. Peranova is one of numerous Cypriot entities that prosecutors have said Mr Manafort controlled.

Mr Ayliff testified that KWC did not know Mr Manafort controlled Peranova, and that if the transfer was a payment related to his consulting work it would have been treated as income – not as a loan – on his tax returns.

Kevin Downing, Mr Manafort’s attorney, signalled on Friday that his defence strategy might involve raising questions about whether Mr Manafort in fact had willfully deceived Mr Ayliff. One way to do that could be to show that documents Mr Manafort had provided to the accountant contained details about foreign bank accounts.

“Only a fool would give that information to his accountant if he was trying to conceal it from the IRS,” Mr Downing said, referring to whether the accountant had names of the Cyprus-based entities in his files and had retained them for his records.

The charges against Mr Manafort largely pre-date the five months he worked for Mr Trump, some of them as campaign chairman, during a pivotal period in the race for the White House.

Jurors on Thursday began hearing about the nitty gritty of Mr Manafort’s business and personal finances, a shift from earlier testimony from prosecution witnesses that focused more on the details of his lavish spending on Land Rovers, ostrich jackets, designer suits and real estate.

Testimony on Thursday also came from Mr Manafort’s former bookkeeper Heather Washkuhn, who said she too was unaware of his foreign holdings and had relied on him to say whether wire transfers should be designated as loans or as income.

Late on Thursday, Mr Manafort filed an objection to the government’s bid to block his legal team from raising the fact that he and his companies were never audited by the IRS. Mr Mueller’s team has argued that any such civil action is separate from the criminal charges at hand. – Reuters